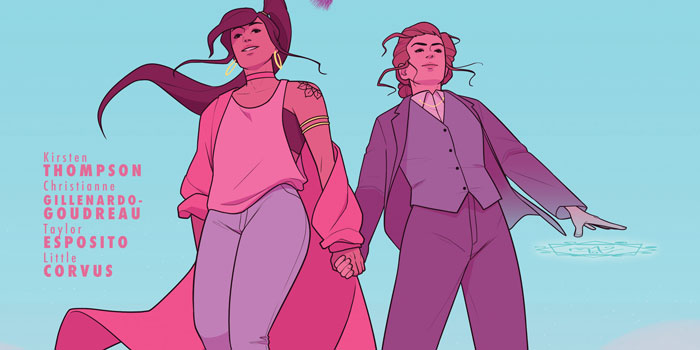 I don’t often feature new Kickstarter series these days, mainly because I receive numerous requests every day, but every now and then one catches my interest.

In this case it’s a campaign for the first issue of I Am Hexed, from Kirsten Thompson (editor on Strange Wit, The Bargain), artist Christianne Gillenardo-Goudreau (Full Circle) and letterer Taylor Esposito (Red Hood and the Outlaws). Covers will be provided by Eisner-nominated artist Little Corvus (Deja Brew).

The series looks to analogise the ongoing LGBT campaign for equality with a present-day story set in an alternate America in which witches “came out” in the 1960s. While you could argue that Marvel’s X-Men used a similar analogy in the 60s, those were different times and the battle for equality has evolved considerably. I Am Hexed is clearly a more politically charged effort with a feministic slant and some charming character concept designs. Consider me sold.

Check out the plot synopsis and preview pages below, or head over to the rather slick www.iamhexed.com for futher plot and characters details. The Kickstarter campaign has already reached its goal and has 16 days to go as of writing.

Witches have been a part of the political fabric of Washington D.C. since it was founded. It’s only within the last few decades (since the 1960s, witches chose to show off their broomsticks) that they have revealed themselves. Now, with the struggle for equality ongoing, Charlotte Helm, a junior staff member from Roanoke has been thrust into the murky and dangerous waters of political games between witches and their political adversaries.

With her boss under suspicion for political corruption, Charlotte, her ex-girlfriend and whatever other help she can find, scrambles to keep one step ahead of the political and magical forces hunting her as she tries to figure out why she’s D.C.’s Most Wanted Witch.