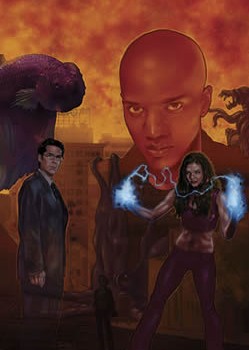 Given the sequential nature of this volume and the previous, I’ll keep this review short. Most of my comments on After the Fall vol. 1 apply here also.

So say that I was disappointed with the first volume of After the Fall is something of an understatement. The series didn’t appear to have any direction. The scripting was uninspired and bland, the artwork was some of the worst seen in a IDW publication, and the entire package felt as though it had been put together by people who did not fully appreciate when and why the source material worked. Angel: After the Fall vol. 2

A series of shorts following each principal player from the television show’s finale to the events of After the Fall 1, First Night is thankfully a better affair all round. The art, from a wide range of artists, brings Los Angeles, Hell to life with a vibrancy and character that Franco Urru’s art never could. Peter Lynch’s writing is more confident here, though I’m supposing he wrote these tales in tandem with the main story. Lorne’s back-story is particularly noteworthy, narrated in a poetic fairy tale style that would be similarly at home in Willingham’s Fables.

Lynch continues to rely on having his protagonists narrate their predicaments, which still jars with the franchise’s dialogue-centric and postmodern style. The inclusion of Betta George, a psychic-fish-thingy that appeared in Lynch’s Spike: Asylum and Spike: Shadow Puppets is a bit of a double-edged blade. On the one hand, it’s great that IDW other Angel books are considered canon, much like the Star Wars comic continuity. On the other hand… nothing will repel readers who’ve clambered aboard this title with no prior knowledge of IDW’s other Angel books than having a talking fish tell the story.

I still believe the two books should have been published as one – without reading this volume, the first is bewildering, but reading this TPB first will ruin several of the first’s surprises. Either way, the concept of a main series intermitted by one-shots has not paid off in either the series’ monthly format or in graphic novel form.

After the Fall: First Night definitely augments the previous book enough to warrant renewed attention to this series – if only to see whether Lynch can pull the whole thing together. But as a standalone read it feels more like a series of footnotes than a continuation.