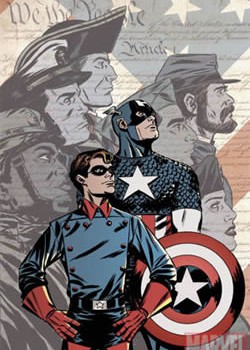 With the Winter Soldier arc tentatively pushed aside, Red Menace picks up that story’s many loose plot strands, predominantly the relationship between Russian General Aleksander Lukin and Cap’s eternal nemesis the Red Skull, who seemingly now exists quite cosily in Lukin’s Skull. Last time around, Crossbones kidnapped the Red Skull’s daughter, Synthia Schmidt, aka Sin, who has been de-aged and reprogrammed by S.H.I.E.L.D. and is oblivious to her past. I loved how Sin’s ludicrously convoluted back-story is detailed with such gravity. S.H.I.E.L.D. should sell their de-aging process to the cosmetic industry; they’d make a sweet packet. Crossbones’ “re-education” of the poor girl is unavoidably sadistic, and juxtaposes well with the colourful, retro-inspired 65th anniversary tale included here, even if the sudden reversion of Papa Skull’s lil’ sociopath to her wicked ways tastes like instant-mix Stockholm syndrome.

As with the Winter Solider storyline, Ed Brubaker manages to epitomise the ethos of Captain America with a postmodern and appropriately unpatriotic slant. This approach has often worked against such properties, as it did in the “Dark Age” nineties, but Brubaker never overlooks or compromises what makes Cap work as an emblem – that he is the purveyor of yesterday’s values.

The aforementioned Anniversary story scatters several intriguing breadcrumbs that justify its inclusion, but as yet another World War II piece it does detract from the contemporary plot. Consequently, as a whole the book is less a substantial read than an appetiser to Red Menace volume 2’s main course.