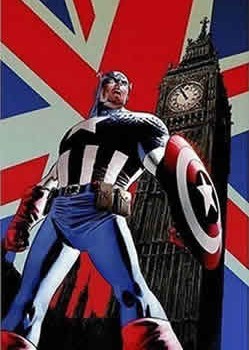 With Civil War steadily approaching, Ed Brubaker is evidently in a hurry to wrap up many of the loose ends from his excellent Winter Soldier arc. Its red buses aplenty as Steve Rogers trails Lukin to sunny ol’ England, teaming up with his English counterpart Union Jack, and the speedster Spitfire. Lukin is still being unaccountably haunted by the spirit of the Red Skull, who he had previously assassinated, and has possession of an arsenal of ancient but technologically advanced weaponry that Cap has previously encountered during World War II. Elsewhere, Crossbones and a freshly perverted Sin are hell-bent on avenging their Nazi mentor and papa, respectively. It’s a shame that the second instalment of Red Menace is overall a little underwhelming, though it’s still an enjoyable continuation of Brubaker’s run. It’s rather disappointing that the current Lukin plot culminates in such a cliché as a giant robot wrecking havoc on a city; as with the Winter Soldier arc, Brubaker’s set-up is stronger than its resolution. But then I guess that’s comics for you; always raising the stakes that little bit higher, until they’ve nowhere to tread but worn conventions.

The Indestructible Nazi moron Master Man also makes an unwelcome return. I always cringe when an old Swastica emblazoned villain such as Master Man, the Marvel equivalent of DC’s Captain Nazi, is reintroduced. Why is it that the Red Skull has made a smooth transition into contemporary comics while a character such as this doe not? Perhaps it’s the slick monochrome suits; at least the Red Skull always has an air of sophisticated villainy about him.

Unsurprisingly, Mike Perkin’s illustrations are consistently stunning, and augmented in no small part by Frank D’Armata’s brilliant colour palette. In contrast to what has traditionally been a vivid and relatively optimistic title, their art is grim and ashen throughout; not entirely surprising in this instance, given the dreary London backdrop.

Nevertheless, reading this book after the events of Civil War, it’s tempting to consider Red Menace, cradled beside the superior Winter Soldier arc, as both a highlight to one of Marvel’s greatest icons, and a fitting swansong to the character as we knew and loved him.