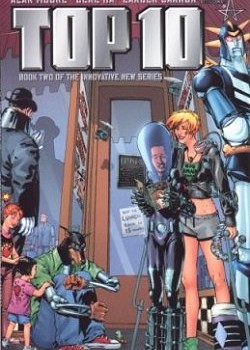 Best described as The Shield with capes, Top 10 is an undeniably enjoyable cop drama with a heavy soap opera element that, while stopping it from ever being placed alongside Alan Moore’s genuine classics, allows its characters to grow on you in a way his typically finite tales rarely can. Whereas volume 1 of Top 10 introduced us to the world of Neopolis through the eyes of rookie gal Toybox, Book 2 demotes that character into the foreground, with the large, eclectic cast given their moment in no order of preference. And the result is a far more enjoyable latter half of this “season 1”. Each individual issue in Top 10 features a standalone story, but Moore is never one to let a loose plot thread go untied, and if it feels as though there’s often a dozen or so cases going on at once, it’s probably because there is. New cases thrown into the teeming mix include a paedophile ring posing as a superhero team in order to recruit adolescent sidekicks, Detective John “King Peacock” Corbeau’s tribulations in an alternate timeline where the Roman Empire never crumbled, and new cop on the block, Officer Joe Pi; a Shogan Warriors inspired robot who flaunts a far better sense of humour than his organic team mates.

But it’s the city of Neopolis that is the star of this would-be cop show. This is definitely a universe I’d happily visit on a regular monthly basis. As with Watchmen, Moore succeeds at what so many of his contemporaries fail at; creating a universe that is plausible in its absurdity. His characters can fly, walk through walls and traverse multiple dimensions, but they’re a far more human assortment than many mainstream heroes. Several even have paunches, heaven forbid. Of course, the guys at Precinct Ten would scoff at the term “heroes” – they’re just comparatively normal guys doing a comparatively mundane job.

Part of the enjoyment in reading this series is the number of references Moore and Gene Ha manage to cram into every scene, from miniscule background appearances by Rom the Space Knight and an amphibian Thor, to a ‘Transworld Transport Terminus’ poster advertising “Vacation on Multiple Earths”. This is definitely a book you’ll want to read several times over, just to catch those little touches you missed the first time round. Ha’s delicately inked, no-nonsense illustrations never pull you from Top 10’s universe; like Moore, Ha appreciates that no matter of eye candy can outshine sincere characterisation.

Though we’ve received a Tolkein-esque spin-off and a prequel, I do hope that Moore writes a Top 10 “season 2” someday soon. If for nothing else, in anticipation of another appearance from the planet devourer Galactapuss…