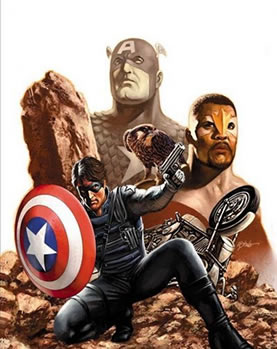 The Winter Soldier storyline is a prime example of a comic property handled intelligently without completely forsaking its history, and indeed a more than serviceable slice of science fiction. Captain America is vocally conflicted by S.H.I.E.L.D. procedures yet works alongside the agency through an ingrained but dated loyalty to his country. The Winter Soldier is evidence of what such blind, patriotic obedience produces. Volume 1 of ‘Winter Soldier’ finished with the excellent tangent story ‘The Lonesome Death of Jack Munroe.’ We find out that Munroe has been framed with the assassination of the Red Skull and the bombing in Philadelphia. And then there’s the new Ruskie scoundrel on the block, Aleksander Lukin, whose possession of the Cosmic Cube appears to be rapidly diminishing his sanity.

As with much of his mainstream superhero work, I often get the feeling that Ed Brubaker would rather write something a little more risqué and less genre specific. He’s definitely more in his element when conceiving ways for the sociopathic Crossbones to kill faceless G.I.’s than writing the dialogue between Steve Rogers and Sharon Carter. His decision to combine the Cosmic Cube, an old Marvel plot-device which grants its bearer God-like powers and is therefore the Golden Fleece for all respectable supervillains, with a darker and more grounded World War II plot.

The flashback sequences, which worked so well in the first act of Winter Soldier, do become a tad overwhelming, burgeoning and convoluting what is a relatively simple tale. It’s also mildly amusing that Cap refuses to believe the identity of the Winter Soldier – as someone who has cheated death himself and is bordered by allies and enemies who’ve also risen from the grave, he’s awfully narrow-minded.

As is often the way with these tales, Brubaker’s set up in Winter Soldier has been so capably executed that the anticipated face-off between Cap and his erstwhile sidekick is somewhat anticlimactic. But with numerous loose ends remaining, this book merely marks the end of the beginning of Brubaker’s supreme run.