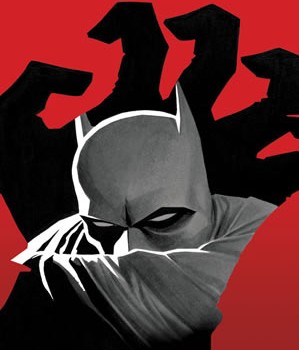 A combination of camp murder mystery and drug-trip mindfuck, The Black Glove expands on the tangled events of Batman & Son. Neither of the stories conclude or connect, but the book makes for a marginally better but equally confused read that will continue to alienate casual readers unfamiliar with Grant Morrison’s approach to narrative. First up, ‘The Island of Mister Mystery’ brings back a forgotten slice of Batman’s past in the form of the International Club of Heroes, a group of affable bat-themed vigilantes financed by bored millionaire John Mayhew. When a tropical island reunion sees them greeted by a video of a mysterious host wearing Mayhew’s face as a balaclava, the Club are swiftly knocked off one at a time as Batman fights to find the identity of their hunter.

Morrison clearly loves old-school Batman, including many parts of the character’s past that have been retconned from public memory and DC continuity – often with good reason. But the Agatha Christie styled murder mystery rewrites continuity just enough to make the story work, and the International Club of Heroes themselves are such a likeably eclectic bunch of C-list losers and self-derivative ethnic stereotypes that it almost seems a shame to have them bumped off one by one in the name of good detective romp. Hopefully they’ll have an expanded part in the post-Final Crisis DC Universe, a la Shadowpact, and receive their own mini-series.

A thoroughly enjoyable caper, my only gripe with ‘The Island of Mister Mystery’ is that at three issues it feels somewhat hurried. Morrison can never be accused of lacking in ideas, and when he’s at is best you naturally want more. Ironically, the opposite can be said for the remainder of The Black Glove, which drags a generic idea to breaking point.

Pyromaniac bat-impostor Lane, last seen fighting a future incarnation of Batman some twenty years into the future in Batman & Son, returns to antagonise Gotham’s finest. Whereas that books introduction of the trio of impersonators was muddled and confusing, Morrison’s explanation for Lane and the hulking “Bat-Bane” Branca, is actually uncharacteristically straightforward, drawing interesting comparisons to the International Club of Heroes. Batman’s battle with Lane descends into a hallucinatory trip that refers to his inner struggle in 52, though few revelations are offered. That somehow Morrison somehow manages to squeeze in Batmite, albeit as a figment of Wayne’s psyche, is testament to his ability to throw the most incompatible of ideas together and more often than not make them gel.

Wayne’s relationship with philanthropist Jezebel Jet, who perpetually diatribes against the western world’s exploitation of the East while enjoying the highlife with her billionaire boyfriend, has become incredibly tiresome. Bruce Wayne has always been an understandably difficult character for writer’s to grasp, perhaps because he is essentially a public façade for his night personality. Why he’s required to link arms with so many dreary partners I’ll never know.

This plotline also introduces the Blofeld-esque puppetmaster of Gotham’s criminal underworld, the eponymous Black Glove. I’m writing this review just as Batman R.I.P. has reached its conclusion, so the Glove’s identity is by now probably known by all. As a lead-in to that big event, The Black Glove is ultimately a mixed bag of half-concepts. Not all of Morrison’s ideas work, but devotees to his work as well as fans of Batman in general, will find something to enjoy here, if not particularly love.