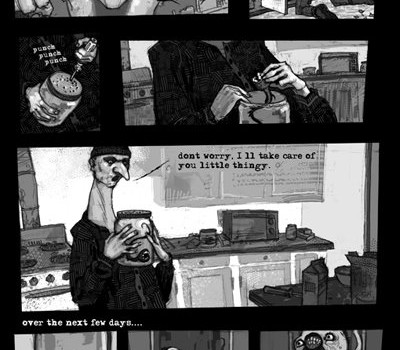 2008
Written and illustrated by: Ben Jelter

Dejected underachiever Greg lives alone, routinely belittled by his mother and working a dead-end job. Seemingly Greg’s predicament could not get any worse when he discovers a rapidly expanding tumour on his neck. However, the tumour soon detaches itself from him and begins to grow and assume the form of a human female.

To elaborate further on The Tumor’s bizarre, minimalist plot would be to ruin its purpose. In a medium dominated by “high concept” ideas and expansive but hollow fantasy universes, Ben Jelter’s self-published debut is a deceptively simple yet masterfully handled exception to the standard, and one of the most original and involving graphic novels you are l likely to read in a long time. The Tumor by Ben Jelter

There are shades of Kafkaesque existentialism in The Tumor’s uninhabited surroundings, as well as Neil Gaiman and Dave McKean’s 80s-90s works such as Signal to Noise. Jelter keeps his dialogue sparse, allowing his pictures to speak for themselves. The book is carried throughout by his wonderful monochromic art, which is better than most mainstream titles, and a cinematic sense of ambiance that carries his surprisingly appealing man/tumour couple.

The Tumor also showcases some memorable character designs. Lonely everyman Greg is a bizarre creation, his vulture-like neck and nose belying his timid yet weary eyes, while his mother is depicted as a foul, crooked-toothed mouth that barks well-intentioned orders at him down the phone. As Greg’s unlikely relationship with his sentient growth heads towards inevitable tragedy to finish exactly where it started, I felt a genuine sympathy for the poor sod.

It has become almost obligatory to compare a unique and indefinable work such as this to the films of David Lynch, so I will. Whereas Lynch’s Eraserhead studied the stages of one man’s alienation to his freakish child, I felt that The Tumor touched upon the cycle of complacency that infects even the most passionate of relationships. At least it did in my mind; I suspect that different readers will come away from this book with different perspectives, each influenced entirely by their own personal experiences. And that is exactly what truly good art should strive to achieve.

The independent and self-published comic scene has always been an exciting one, but rarely does it reach this level of rich subtext found in The Tumor. Perhaps this is due to the aspiring writer’s need to fit a certain niche, or the understandable ambitions many artists have to one day franchise their prized creations. Ben Jelter’s first graphic novel does not fit conveniently into a genre, nor is it likely to spawn a sequel. And in this digital, franchise-dominated age that is perhaps the bravest creative direction one can take.