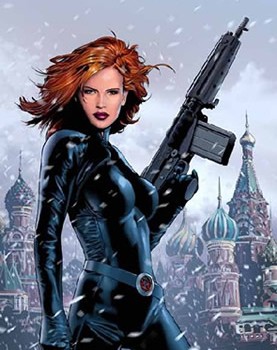 Things I learnt today from crawling prone through the digital shrubbery of the World Wide Web like the wind-up soldier toy my dog mauled to bits when I was but 5 years old: Following the news that Mickey Rourke and Sam Rockwell will be playing the undermined antagonists in the Iron Man sequel, Variety is reporting that Emily Blunt has been cast as the foxy Soviet spy Black Widow, Natasha Romanoff.

Blunt, who is rapidly rising in Hollywood due to such hits as The Devil Wears Prada and Charlie Wilson’s War, will hopefully be able to overcome the career stigma that has actresses such as Halle Berry and Charlize Theron have had to bear, when she slips into a skin-tight catsuit. Whether she’ll be required to slip on a dodgy Russian accent is another matter.

The world will be watching the Watchmen movie on March 6, as Warner Bros. have settled an unspecified upfront sum with Fox. All those concerns that the film will not be released this year, by some accounts ever, now seem a little bit silly don’t they?

Here’s hoping that Zack Snyder’s movie is everything it has the potential to be, and isn’t trimmed down into some pale imitation of its former graphic novel self.