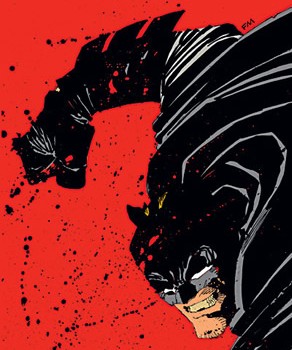 Like Star Wars prequels and the fourth Indiana Jones, Frank Miller’s follow-up to his seminal The Dark Knight Returns was never going to live up to over 15 years of expectation. When the prestige format miniseries was announced around 2000, eager anticipation soon turned to apathy on its release in 2001. Time has not been kind to Miller’s peculiar sequel; it has become DKR’s hushed-up offspring, a pop culture satire that seldom hits its mark and serves no purpose other than the defilement of its predecessor. Slightly older and increasingly fragile, Batman has now taken a backseat in his rebellion against America, commanding a group of adolescent terrorists alongside Carrie Kelly, previously Robin but now calling herself Catgirl. In his battle against Lex Luthor’s Orwellian USA, Batman recruits the Atom, Plastic Man and Green Lantern among others to topple the governments trio of disillusioned guardians; Superman, Wonder Woman and Captain Marvel.

While titles such as Kingdom Come and New Frontier have taken established DC continuity and tinkered respectively with its cherished characters, no concept or idea in The Dark Knight Strikes Again works. A disgraced Dick Grayson as a Joker-impersonating serial killer, a giant frog Brainiac, a leopard-skin Catgirl, Jack Kirby’s Big Barda portrayed as a porn star… and the gayest Flash costume redesign ever are just some of the wonders within Strikes Again’s frantically lurid pages. Experimental storytelling would be fine; but there’s no excusing Miller’s slapdash writing here. Whereas The Dark Knight Returns read like the opus a long-term Batman fan had brewed in his head for several decades, here Miller slaps his ideas on the page like they were dreamt up over a weekend.

The Dark Knight Strikes Again isn’t even an attractive book to look at. Miller’s art is sparse and undeveloped, and lacks the measured simplicity of his Sin City series, while Lynn Varley’s garish colours look the work of an art student discovering Photoshop for the first time. I’m all for the homegrown, independent aesthetic that I can imagine Miller and Varley were aiming for – a style Mike Allred does brilliantly – but the harsh reality is that Strikes Again looks rushed and insincere. The news broadcast montages, so inspired way back in 1986, now feel hackneyed and overplayed.

As an increasingly adult male who is forever justifying his love for the comic medium to disdainful outsiders, it takes a lot for a book to genuinely make me feel embarrassed while reading it. The Dark Knight Strikes Again achieves this much. Defending such a work with the popular “tongue in cheek” clause is an insult not only to the Batman franchise but superhero comics in general.