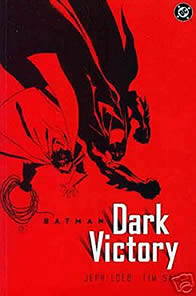 Dark Victory follows on directly from the events of Loeb and Sales The Long Halloween. With the supposed Holiday killer Alberto Falcone behind bars, a new serial killer, the Hangman, is targeting Gotham City’s corrupt cops. As you can imagine, there’s a veritable buffet of potential victims. Jeph Loeb’s adherence to the murder mystery formula emphasises how well Batman is suited to the detective role. Far too often in contemporary comics he relies on physical prowess to solve problems; it’s easy to forget that Batman is every bit the sleuth.

As with The Long Halloween, there are twists aplenty. Thought the killer’s identity isn’t as tightly sealed this time around, Loeb weaves the previous books themes with a confident sense of closure that Halloween lacked. The gang feuds that began in Miller’s Year One end in as bloody a way as one might expect, while Batman’s personal ties with both Selina Kyle/Catwoman and Harvey Dent/Two-Face deepen.

Robin’s origin feels like a last minute inclusion here, his garish yellow/red/green costume jarring horrendously with Sale’s noir art. Both Loeb and Sale fail to convince us that the sinister, arguably psychotic wraith that hides in shadows dressed as a winged rodent and the fatherly figure that takes a young ward under his wing are mutually exclusive. Thankfully, the birth of the Boy Wonder plays second fiddle to the intriguing central plot.

Tim Sale’s art has improved dramatically since the last instalment, his character designs possessing a crispness that puts them amongst the finest renderings of the Dark Knight and his associated allies and rogues. Gordon is particularly striking, his glasses reflecting Gotham’s nightlights like perpetual headlights.

Dark Victory doesn’t quite live up to its predecessor, if only for the sense of déjà vu it evokes, but alongside The Long Halloween this is still one of the most successful attempts at a Batman who uses his brains.