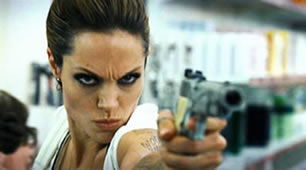 I must confess to having had a difficult time reading Mark Millar’s superhero satire Wanted the first time around, and further difficulty in reviewing it. How could I objectively rate a book that excels in storytelling and artistic prowess, has a one-off universe that is second only to that of Moore’s Watchmen, is witty, ingenious and startlingly original… and immoral to the point that I felt genuinely sick while reading it? Though Russian director Timur Bekmambetov’s American debut has a first act that is practically lifted directly from comic to big screen, his film takes a series of turns that will not only surprise those familiar with the source material, but gives the film a disposition of its own. The Fraternity, a group of super-charge assassins that take their hit list from the Nostradamus inspired Fates, who read individual’s destinies form a magic loom (no, really) are less morally vacuous than their costume-clad comic counterparts, arguably the good guys in an clandestine kind of way.

Enter bored office drone Wesly Gibson, who is integrated into the Fraternity when his father Mr. X is assassinated by rogue agent Cross. James McAvoy is the antithesis of the action hero, and intestinally so; diminutive and pallid, it is his transformation into a superhero that is the film’s strength, as Wesley literally has his new perspective on life beaten into him.

I say superhero, for thought there is nary a cape in sight, Wanted is as grounded in reality as Angelina Jolie looks like a normal woman. Jolie’s larger than life physiognomy is put to good use here as the tattooed Fox, Wesley’s mentor and prospective love interest. Morgan Freeman does what Morgan Freeman has always done, and does it well, while Marc Warren (Hustle) and Night Watch alumnus Konstantin Khabensky add a bit of personality to the proceedings.

Anyone unfortunate/misfortunate (delete where applicable) to have been subjected to Bekmambetov’s previous films, the Russian fantasies Night Watch and Day Watch, will have a pretty good idea of what to expect.  Bekmambetov’s visual/aural apliction of his brimming imagination is breathtaking at times, overwhelming at others. Like Kill Bill, Wanted is an example of mindless, heartless style over substance that is executed so precisely that its shortcoming are glossed over.

Much like last year’s Shoot ‘Em Up, Wanted‘s action is preposterous to the point of parody. Bullets turn corners while sports cars speed along the sides of buses. Its best defined as bullet-porn, with guns presented as phallic extensions of their owners. At times it falls into the Matrix cod philosophy pitfall, but whereas that film succeeded on more than several levels, Wanted would rather remedy its existential ponderousness with a slo-mo bullet to the head. The few moments when Brandt, Haas and Morgan’s script ventures towards something more intellectual are achingly juvenile.

Wanted is mindless, blunt and just darn silly at times, but it’s never short on ideas and takes so little time to reload that you’ll hopefully overlook the plot-hole riddled incomprehensibility of it all.