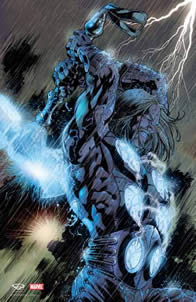 From the very first issue, The Ultimates defines its intentions with a suckerpunch; this is the Avengers in our world, driven by our politics and prone to our vices. Back to that first issue. The last hurrah of World War II era Captain America, and his subsequent freezing, sets off Super-human with a velocity that it sustains throughout. By regular Marvel standards not a lot happens, but Mark Millar brings his science-minded supergroup together in a way that is intricate and believable. There are no weak links in this chain; for once Bruce Banner is as valuable a member as his green/grey alter ego, and Steve Roger’s blood may hold the key to an entire army of super-soldiers.

Up until The Ultimates I had seen the Ultimate imprint as a bit of a waste of time. Neither Ultimate Spider-man nor Fantastic Four were substantially different from their counterparts to be of interest to all but the casual reader. Strangely, Millar takes the opposite approach here, taking the familiar faces and worn concept and producing something different enough to stand on its own. While the aforementioned titles catered primarily to those with only a passing knowledge of the Marvel Universe or those curious about Marvel’s finest after enjoying the corresponding movies, The Ultimates can be appreciated as both an inventive re-imagining of the team and a satire in the same “widescreen” vein as The Authority, which both Millar and Hitch previously worked on (though separately).

On a more personal note, though I enjoyed and respected what the creative talents concerned have done with The Ultimates, the series does lack a certain warmth, the likes of which had adhered the Fantastic Four and X-Men runs through their lowest points. Millar’s razor-sharp characterisation has ensured that not one “hero” in this incarnation of the team is remotely likeable. Captain America is now a military bully, Hank Pym is a victim to a gargantuan inferiority complex and Tony Stark… well, Stark hasn’t changed enough. On the plus side the Ultimate Jarvis, now a bitter, sardonic queen, is a riot.

Whereas Ultimate Spider-man took the web-slinger back to his roots, and Ultimate X-Men offered a variation on everybody’s favourite mutants minus the blight of time travel and alternate universe convolutions, The Ultimates stands as an exceptional, if not definitive, team origin book that is smart enough to invite readers from beyond the spandex-crowd, or indeed the comic medium. And that’s high praise indeed.