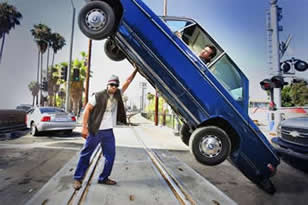 Formerly a hot property which numerous studios fancied making but could not conceive the special effects on a feasible budget, Tonight He Comes’ decade-long journey from screenplay to screen has attracted an equal share of interest and scepticism. Several name changes later and Hancock has made it to celluloid; unfortunately it’s difficult to believe that this tepid effort is derived from the same script that had the likes of Tony Scott and Michel Mann interested. Eighty year-old amnesiac superman John Hancock, his name taken from a signature request, is not your average hero, or arguably even a hero. His reckless attempts at “dogooding” have resulted in millions of dollars worth of destruction, the death of Walter the gray whale and a thoroughly contemptuous public. When public relations consultant Ray Embey (Bateman) offers to help Hancock win back the public’s favour, our indestructible orphan takes a voluntary stint in a prison that isn’t nearly highly security enough, fully aware that it won’t be long before the public forgive him in exchange for his aid.

Will Smith does something special with what is an unabashed, by-the-numbers star vehicle. In a film that takes some questionable turns, Smith is the one element that preserves integrity throughout, sustaining the restrained, brooding angst of a discarded orphan whose self-loathing negates his desire to earn acceptance from the helping of others. Jason Bateman, so enjoyable in Juno, and Charlize Theron, whose looks will always work against her acting abilities, are both wasted as the insipid couple that take Hancock in.

Those baffled by The Kingdom‘s impulsive shift from intelligent political thriller to Woo-style shoot ’em up will be glad to know that Peter Berg continues his inability to maintain course here, destroying a reasonable first hour with a ridiculous revelation and quite possible the worst superhero origin story ever conceived. As with both Iron Man and the recent Hulk, Hancock receives a shoddy eleventh hour villain in bank robber Eddie Marsan, who after his wonderful Mike Leigh roles should be above this sort of thing.

It would be unfair to say that Hancock is a complete failure; the film has an abundance of moments, many of which were exhausted in the trailer, but ultimately it lacks cohesion and satirical edge. With little to say that hasn’t been said better by recent superhero flicks, and let down by a schmaltzy superficial heart, what may have worked as a TV pilot does nothing to distinguish itself on an increasingly cramped big screen.