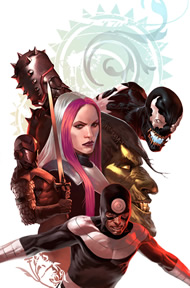 Okay, so it’s another year, another reboot for the Thunderbolts, a series that has always been enjoyable but never exceptional. With sales magnet Warren Ellis on board, and a line-up that consists of more readily recognisable villains such as Venom and Bullseye, the Thunderbolts look to be getting the recognition they’ve long deserved. Unfortunately, this isn’t your daddy’s – make that slightly older brother’s – Thunderbolts. At times ‘Faith in Monsters’ is reminiscent of Peter David’s run on X-Factor; bar a few familiar faces, the book’s tone and premise is too different to be justly considered part of the same series.

Excluding his work on Stormwatch and The Authority, I have always had a problem with Ellis’ mainstream superhero work. Like Ed Brubaker, Ellis will happily jettison characterisation and continuity for the sake of a moment of inspired dialogue or novel violence, whereas a writer such as Allen Moore will always find the middle ground between what he hopes to achieve and the sensitivities of the franchise concerned. With Thunderbolts, more than ever Ellis has the freedom to get down and gritty without compromising the creative confinements of the Marvel universe. Bullseye is a despicable, unmanageable psychopath, while Venom has a penchant for munching on human heads.

Unlike the previous incarnations of the team, few of the members are likely to find redemption, the sole exception being Songbird, who dearly deserves a second shot at liberation some time in the next decade. The much hyped Penance, formally Speedball, is severely lacking in personality… which may be the point, but I’m finding it difficult at present to have any sympathy for the most undeservedly hated hero in Marvel America.

I neither loved nor hated this book, yet I am compelled to read the following volume. Perhaps what keeps this disgruntled reader’s interest piqued is the fragility of this new team, which is less a team in traditional comic book terms than an imprisoned gathering of sociopaths, psychopaths and the morally confused. Norman Osborn’s frequent pill popping, and Bullseye’s microchip-in-the-head induced good behaviour (actually, it’s “a net of nanometer-sized generators, receivers, triggers and wires,” but I like to bring these things down to a level even I can understand) are all ticking time bombs.

In fact, this element of extremely fragile alliance makes Thunderbolts a blast. Perhaps it always has. Like DC’s Suicide Squad, this current team roster has a limited shelf life; it’s difficult to imagine the book staying as it is for more than a dozen issues. But as always, Ellis will ensure that the imminent devastation is handled with a high level of intelligence, if not depth.