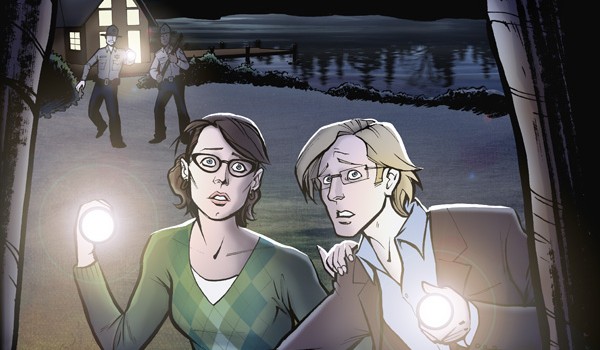 The Abominable Snowman and a mounting body count are the least of our protagonists’ worries in Erik Evensen’s witty comedy horror tale of cryptozoology, pop culture and Americana. There’s also love in the air. Awkward, geeky, reference-laden love.

Ineffectual grad student Brian Wegman is hired to apply his expertise in paleoanthropology to a police investigation into the death of two students at Wolfe’s Bay, by what is believed to be a large primate (spoiler: it isn’t). He soon strikes a chord with Winifred Roth, the local sheriff’s daughter and equally nerdy professor of folklore. As they compete to outdo one another with Star Trek references, Brian and Winifred’s romantic tension is adjourned by an encounter with what appears to be the legendary Bigfoot. Evensen (Gods of Asgard) brings what could have been a rather generic take on the Sasquatch mythology to life with heart and humour, nodding to everything from the X-Files and Doctor Who, to Twin Peaks and Star Trek.

The Beast of Wolfe’s Bay‘s focus on character and banter reminded me in parts of Lake Placid. But I appear to be the only person on the planet with fond memories of that movie… so, er, replace the aforementioned movie comparison with either Zombieland or Slither, your choice. You get the idea. These wonderfully defined characters and Evensen’s snappy dialogue are complimented by his equally appealing and engaging art. Winifred Roth is the sort of female character we don’t see enough of in horror or fantasy comics; sensibly proportioned and by no means a mere romantic interest or manic pixie dream girl.

The book’s eventual reveal is somewhat disappointing, but Evensen’s characters are so endearing that The Beast of Wolf Bay is arguably less about the mystery of the Sasquatch and more about two ineffectual adults finding one another amidst the supernatural sleuthing. I’d love to see these two indulge in another cryptozoological adventure soon.

The Beast of Wolfe’s Bay is currently available on Amazon and Comixology, available in both digital and print. Visit Evensen’s site, www.wolfesbay.com, for further information and a preview.