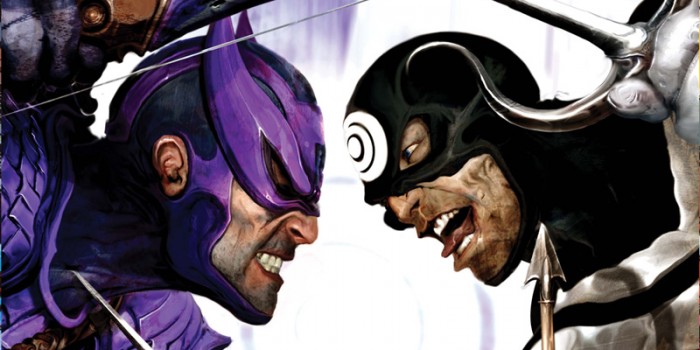 If Marvel still adhered to the Comics Code, the first two issues of Dark Reign: Hawkeye would have been snipped down to three pages. But after 20-odd pages of unadulterated fun, Andy Diggle’s miniseries, which follows Bullseye’s brief stint as The Dark Avengers’ Hawkeye (they fundamentally share the same “superpower”), doesn’t quite know where to take Daredevil’s psychopathic nemesis next.

As talented a writer as he is, Diggle’s work here is undermined by the fact that Bullseye possesses no redeeming qualities whatsoever. As an antagonist, that works perfectly, but when headlining his own book, the character isn’t even remotely sympathetic in the way that Deadpool, Deathstroke or Deadshot (I tried to think of another villain with a less macabre name, but failed) have been. After Bullseye Hawkeye kills numerous civilians for kicks (in front of a film crew) it’s impossible to care when our cold-blooded crack shot suffers an inevitable string of hazardous predicaments. Fortunately, Diggle balances out the counterfeit bowman’s mischief with two more interesting plots that run through this miniseries. First up is whether Norman Osborn will tolerate Bullseye’s insubordination much longer. The Dark Reign era Osborn may be ostensibly composed, but he isn’t beyond threatening to have Bullseye kicked into an unmarked grave, or, my personal favourite, hurled into the sun courtesy of the Sentry. While Osborn’s fractured psyche will eventually tear the Dark Avengers apart, returning to these Dark Reign volumes emphasises just how strong a presence the character has even without the Green Goblin mask.

Equally enjoyable is Ben Ulrich’s pursuit of the truth – apparently, he’s the only New Yorker unconvinced by the new Avengers – which lends a much needed moral everyman to this wretched hive of scum and villainy. Dark Reign: Hawkeye delivers shallow but fun supervillain hijinks, then, with some quality art by Tom Raney and Scott Hanna.