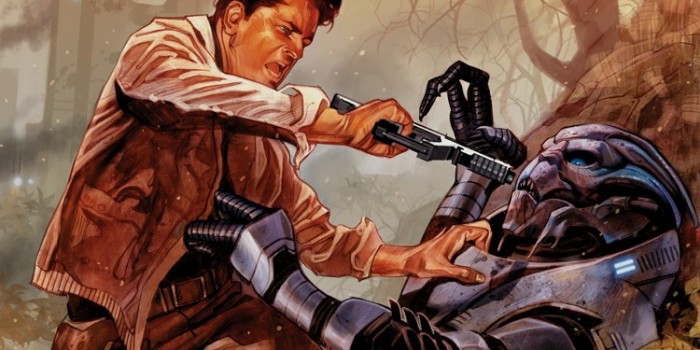 The problem with enigmatic characters in serial fiction is that they never retain their mystery for too long. Intrigued audiences will always demand an origin story, be it the reason behind Michael Myers hatred for promiscuous teens or the origin of Logan’s unique skeleton. I’d like to know just how many Wolverine fans felt that their enjoyment of the character has improved post-Origin. Anyone?

Likewise, Evolution faces a difficult task of delivering gamers the back-story to the Mass Effect trilogy’s enigmatic antagonist, the Illusive Man; a fascinating villain who is difficult to comprehend and impossible to second-guess. Or at least he was. Here we discover how the Martin Sheen-alike went from a moral civilian to a xenophobic criminal mastermind in several easy steps. And yes, the origin of those steely blue eyes is addressed, along with a welcome appearance from Saren and a visit to the (pre-Reaper assault ) Turian homeworld, Palaven. That alone is probably enough to entice fans of the videogame series to splash out on this volume. Bioware has surely crafted one of the most extensive and beautifully rendered fantasy universes of the past decade, but unfortunately, as with Stars Wars before it, the Mass Effect franchise’s extended fiction has so far been approached with a slavish and unsure hand. Omar Francia’s art is good, but his imagery doesn’t venture beyond the vehicles and tech that were introduced in the first two games, while the comic’s locations and secondary characters lack that “special Bioware something” which made the universe feel so alive in the first place.

Mac Walter, lead writer of ME3, has ensured that Evolution fits in neatly with the franchise’s third instalment, but I don’t envy John Jackson Miller’s job of condensing that plot into a four issue miniseries. As is often the case with such miniseries, his script rarely spares the time to flesh out characters that we might want to know more about, as it guides us through the various incidents which collectively turn Average Joe into illusive Man with workmanlike efficiency.