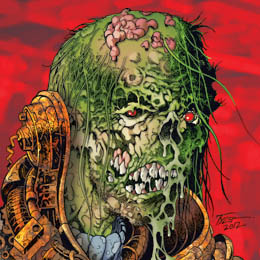 This first volume will feature 6 complete tales from independent comic book creators such Rob Anderson (Rex, Zombie Killer), Tim Tyler (Faust, Blood Reign), Terry Cronin (Students of the Unusual), Douglas Paszkiewicz (Mad Magazine) and many others. Check out the complete list of indie talent here, or view the clip below:

One thing I like about this series is that Aazurn Publishing is pushing a “no huge overprint, no digital version and no back issue sales” approach to comics, which may seem somewhat limited in scope in this digital era, but does make these Indie Comics volumes a wonderfully transitory thing; as the funny books I collected as a teen were.  Back then, you missed an issue, you were screwed.