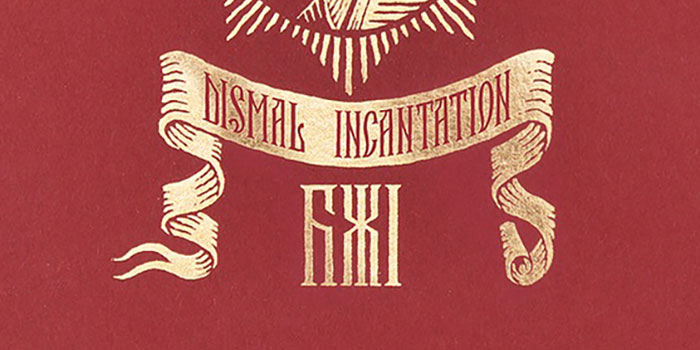 I’ve always felt that digital and physical books can coexist peacefully in readers lives, but as eReaders proved themselves to be cheaper and more convenient alternatives to their paper progenitors, I’ve noticed a trend of publishers and artists creating what I like to call “books as nice things”. Dismal Incantation, by the ludicrously pseudonymed Herman Inclusus, is such a book; a nice thing that’ll make your day just that little bit richer.

I say nice, but Inclusus’s debut graphic novel, which narrates a monk’s efforts to booster his dying religion by raising its founding father from the grave, is anything but. It even begins with a disclaimer telling you that its contents hold “no artistic or literary merit … and intendeds to deprave and corrupt those whose minds are open to such immoral and perverted influences.” Not that there’s any weight to the first part of that declaration; this is an idiosyncratic work that’s breathtaking in its painstakingly detailed imagery and comically macabre tone. Adopting the style of a medieval illuminated manuscript and according to its author inspired by byzantine painting, gothic literature and EC Comics, Dismal Incantation recounts the monk’s grotesque ritual step by horrific step, as the plot takes us through animal sacrifice, murder, necrophilia and the depths of his devotion to a cruel (and unnamed) faith.

The book measures in at a wee 110mm x 155mm, but each page is crawling with macabre details such as cannibalistic rats, decapitated beasts and the monk’s mummified predecessors. So intricate are Herman’s illustrations that I found myself staring into each minuscule page and wishing the images were bigger, while fully aware that they worked so well at this smaller scale. It’s that time old case of wanting a work of art to be different but understanding that its artist chose otherwise for good reason. Dismal Incantation can be purchased at www.hermaninclusus.co.uk for just £9.99, alongside other similarly sinister offerings such as a “HxI Ritual Hood” Balaclava Beanie and some stunning wooden icons.