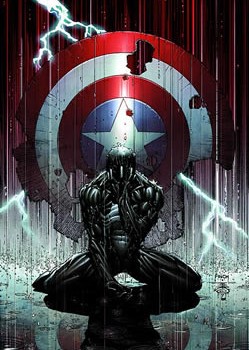 With Steve Roger’s dead, Marvel has seen fit to churn out this collection of reactionary tales advertising featuring their finest properties. The gimmick here is that each of the episodes is based around one of Kübler-Ross’s five stages of grief: Denial, Anger, Bargaining, Depression and Acceptance. ‘Denial’ kick-starts the proceedings with the obligatory Wolverine appearance. Sceptical that the assassination of Steve Rogers was genuine, Logan, who proceeds to stick his whiskers in every subsequent story, sneaks onboard the S.H.I.E.L.D hellicarrier with the aid of Daredevil and Doctor Strange, and beats the shit out of Crossbones. And… er, that’s about it.

‘Anger’ is a segment so completely worthless that I refuse to waste more than one sentence on it. ‘Bargaining’, which sees the return of Hawkeye, is however a far more interesting tale. Stark wants Clint Barton to continue the Captain America alias; not least because Barton is the only grunt to have successfully wielded Cap’s mighty shield without cracking his cranium wide open. But Hawkeye, like Cap, is now aligned with the past – though he’s only missed years rather than decades, a lot has changed in those few years. And he isn’t too appreciative with what Iron Man has done with the Avengers since his death.

Like ‘Anger,’ ‘Depression’ is another waste of time, in which Spider-man stands by Uncle Ben’s grave and sobs about those loved ones he’s lost. He racks it up to six, which given the number of alien invasions and super powered gits hell-bent on world destruction New York has tolerates each and every month, is actually pretty good going. This segment is also noteworthy for an unintentionally hilarious scene in which Wolverine adopts a philosophical state of mind. Stick to poking holes in things with your adamantium claws, Logan. It’s what you’re good at.

Finally, ‘Acceptance’ features the big funeral, in which both supporters and opposition of the Registration Act put aside their differences for one day, and clings to the usual patriotic nonsense that Ed Brubaker so capably manipulated in his recent Winter Soldier run. That so much of Fallen Son is spent reminiscing on the past only emphasises the questionable path so many once-beloved heroes have taken since Civil War.

Jeff “love-him-or-hate-him” Loeb writes adequately enough here, and the way the stories overlap one another is handled nicely. The diverse but always proficient art team, whose collaboration has spawned a splendid looking book. From David Finch’s kinetic, Liefield-reminiscent lines to the animated styling of Ed McGuinness and Dexter Vines, the mini-series looks fantastic whatever art direction it takes.

But unlike, say, Fables 1000 Nights of Snowfall, there is nothing in Fallen Son that sheds new light on old situations or reveals shades of character. The understated return of Hawkeye aside, this is another lusciously presented Marvel publication that isn’t able to justify its existence.