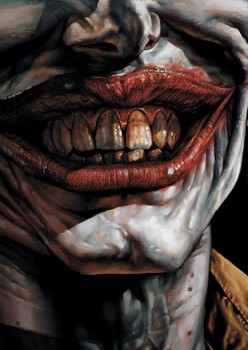 The funny books are a confusing puddle to sporadically dip one’s big hairy toe into. While Bryan Singer’s first X-men movie spanked the Box Office, comic readers were confused as to why the sycophantic, bulbous cretin Toad had evolved overnight into a nimble martial arts master resembling Ray Park. Similarly, upon the film Daredevil‘s release, Bullseye briefly put aside his (admittedly stupidly conspicuous) costume, donned a leather trench coat and drew a set of crosshairs on his forehead. Evidently, Colin Farrell has considerable sway on the fickle fashion trends of the Marvel universe. Taking this approach, Brian Azzarello’s Joker doesn’t so much disregard continuity as step in and out of it. The titular Clown Prince of Crime now has the Heath Ledger Chelsea-smile, while Killer Croc is a mildly disfigured gangster, aesthetically similar to the iteration of Croc used in the Gotham Knight DVD, as opposed to a primitive reptilian mutant.

Joker follows the tailspin into hell of thug Jonny Frost, tentative chauffeur to the Joker, who once again has been released from Arkham Asylum. What ensues is a concoction of Henry: Portrait of a Serial killer, Man Bites Dog and Training Day, as Jonny Frost – his name presumably a play on the killer of Bruce Wayne’s parents, Joe Chill – is lured in by the seductions of the Joker’s post-Arkham killing spree. Jonny relishes in the depraved acts he witnesses far too much to be even remotely sympathetic, and yet one can’t help but flinch as Azzarello gleefully buries him in shit. Only Jonny is a dumb enough thug not to see where his friendship with the Joker is going – and by the time he does, it is of course too late.

It needn’t be said that Brian Azzarello (100 Bullets) writes this style of noir-drama well; he has always scripted gangsters better than superheroes. Bar a few questionable lines of dialogue – I’m still unsure as to why Joker repeatedly calls Penguin “Abner” – Azzarello maintains that imminent train-wreck level of tension that is rarely achieved in the comic medium. As captured in Heath Ledger’s portrayal of The Dark Knight, Azzarello depicts the Joker as a delicate bomb begging to be ignited, while simultaneously making us humble readers feel guilty for being mesmerized by his increasingly horrendous actions.

The art in Joker adopts an incredibly effective approach. Whereas the majority of Lee Bermejo’s pencils are finished by Mike Gray’s jagged inks and Patricia Mulvihill’s cinematic colour palette, the books key images impose Bermejo’s photorealistic paintings atop the more conventionally rendered backgrounds. This contrast between the two styles flawlessly translates the schizophrenic clown and his dualistic relationship with Batman, who only appears in the book’s final pages.

This conservative application of the caped crusader only gives his eventual appearance that more oomph, and much like the fade out of Alan Moore’s The Killing Joke, his sole line of dialogue is one that adds further dimension to the Batman/Joker relationship, and will possibly resonate for years to come. In equal parts sickening and subtle, Azzarello’s Joker sits at the same table as the very best Bat books.