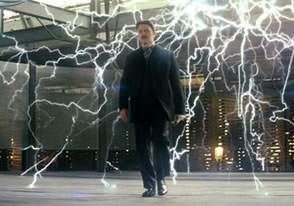 As stage ingeneur John Cutter (Caine) explains during The Prestige’s opening, there are three stages of a magic act: the pledge; in which the magician shows us something ordinary, the turn; in which the magician “takes the ordinary something and makes it do something extraordinary”, and finally the prestige, in which that something is brought back. Christopher Nolan has exhibited his empty palms, and with a nod free of pretension, incited anticipation of the trickery to come. The audience participates in The Prestige as spectator to illusionist. We watch with full knowledge that we are being setup up; we are entering the pledge. Concentrating on the backstage intricacies of rival Victorian illusionists Alfred Borden (Bale) and Robert Angier (Jackman), The Prestige steals the magic from the stage show; the real mystery is located under floorboards and behind locked workshop doors. The complex workings of Angier’s The Real Transported Man result in a fairly basic, though implausible, illusion, but again like the Victorian spectator, we are far more interested in the how than the feat itself.

The two protagonists are parallel opposites; the aristocratic Angier a master showman low on ingenuity, while carpenter’s son Borden possesses a genuine understanding of the workings of magic but lacks charisma and stage presence. The morally ambiguous, progressively obsessive rivalry escalates as the increasingly complex narrative entangles. Neither character is purely good or bad, with both ultimately victims of their, all-consuming, vengeful natures.

Nolan places his own symbolism within the film, providing us with metaphors that on first viewing lie inconspicuously within the story, only in retrospect allowing the film to open up and expand like some intricate stage device. Tesla’s machine embodies magic versus science, old versus new, tradition versus technology, spiritualism versus the machine. Angier and Borden’s bitter rivalry draws parallels with Nikola Tesla’s competition against Thomas Edison, the domineering of an unexplored frontier of science, a modern day replacement for magic and spiritual belief.

The Prestige’s Victorian setting; a time of great social change and scientific breakthrough marked perhaps not the end of the stage magician, but the gradual dissipation of the fantastical that the illusionist provoked; henceforth, industrial innovation would provide the world all its marvels.