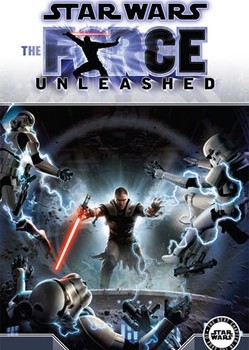 Why do Star Wars comics so rarely work? The space opera movies, with their colourful characters, lovingly hammy dialogue, epic vistas and galactic dogfights should translate perfectly to the comic medium. And yet Dark Horse’s offerings, while seldom terrible, never manage to grasp what makes Star Wars work in the same way that countless video game spin-offs have been doing for the past decade.

Set several years before Episode IV: A New Hope, The Force Unleashed follows the trials of Starkiller, a Sith apprentice secretly raised by Darth Vader to hopefully aid his coup against Emperor Palpatine. Tortured and conditioned from childhood, Starkiller is an emotionless puppet bound to his master’s bidding. As Starkiller begins his rite of passage, cleaning the galaxy of the few remaining Jedi, the separation from his master sparks something in the young Sith that will lead to the establishment of the Rebel Alliance.

At its heart as much tech demo as interactive tale of redemption, The Force Unleashed video game boasted a predominantly interesting cast. Starkiller’s love interest, Juno Eclipse – a name that would sound ridiculous anywhere else, but by Star Wars standards is pretty standard – is the recognisable feisty Leia imitation that this franchise so frequently spawns, but is far from the damsel in distress she initially appears. General Rahm Kota, a Jedi Knight whose refusal to use cloned soldiers saved him from Order 66, is particularly intriguing, demonstrating a wily approach to combat not far removed from the Alec Guinness Obi Wan Kenobi of A New Hope.

Much of the video game’s vivacity has been lost in translation, however, with a script that stays so faithful to the game’s structure – only the battle with nutty Kazdan Paratus has been trimmed – that the end result is a book reads like a checklist of game sequences rather than a story in its own right. One major distinction with this adaptation is that much of the plot is narrated by Proxy, Starkiller’s ‘shape-shifting’ sidekick droid. I appreciate why Blackman would take this route; it allows him to summarise each of the game’s numerous battle sequence in a single page, but Proxy’s superfluous voiceover kills what should be a cinematic experience.  In the book’s first pages we are also told that Starkiller will die – given his position in the Star Wars timeline, this premature disclosure is hardly surprising, but it does bleed the plot of any tension. Even when we’re expecting the worst for our doomed heroes, it’s always nice to have a little hope to grip on.

The artwork is serviceable but inconsistent, though mention deserves to go to Michael Atiyeh’s colour work, which uses The Empire Strikes Back‘s red/blue polarity to striking effect. While The Force Unleashed lacks storytelling prowess, it definitely looks the business.

There are presumably two varieties of reader who might be interested in picking up Star Wars: The Force Unleashed; those with an interest in Star Wars but not video games, and those who’ve played the game and would like to have its story recounted in little hand drawn panels with floating bubbles of words. The quaint bastards. Unfortunately, this book will be deemed a failure by both markets – the former will find the hurried narrative confusing and uninvolved, while there’s little to satisfy the latter that was not presented better via plasma screen and joypad.