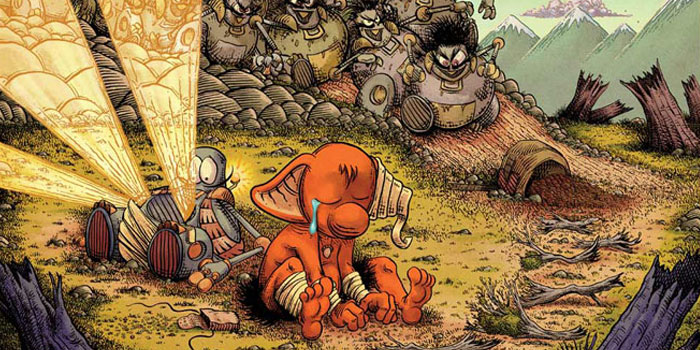 The problem with receiving a ceaseless torrent of review submissions is that far too often the latest instalments of my favourite series get swept away with the flow. Such has repeatedly been the case with Pug Grumble’s wonderful all-ages fantasy Farlaine the Goblin.

The seventh and final volume, ‘The Final Land’ sees Farlaine and Drowsy reaching the end of their journey across the many Oddlands of Wug. Farlaine, still hopelessly in search of a land in which to plant the magical tree Ehrenwort and grow a forest to call his own, returns to the Tinkands where his adventure began, pursued by the huge beast he inadvertently released during his time in the Vaultlands. Farlaine’s improbable world, in which each Oddland is distinguished by a unique theme (the Tinklands, Saltlands, Twistlands and so on) will surely capture the imaginations of children, as will the optimistic Farlaine, whose compassion for others even extends to his pursuant nemesis in a warm and heartfelt conclusion that feels wholly earned.

The enigmatic Grumble cites Bone and Asterix as influences, though I’d also recommend the series to fans of Elfquest and Mouse Guard (David Petersen even provides the alternate cover for this volume). However, Farlaine soon carves out its own identity through Pug’s oddball concepts, intricate inks and evident affection for his characters and world. The final page of this ultimate volume is Grumble’s first ever sketch of the titular goblin, from 2009, and is a fitting testament to his development as an artist and an epic journey nearly a decade in the making.

Farlaine the Goblin reads like a love letter to both its genre and artform. As with the very best all-ages titles it’ll appeal to younger readers and (possibly even more so) adults with an appreciation for the craft who yearn for a comic that feels as though it hails from simpler times.

Discover the series at www.farlaine.com.