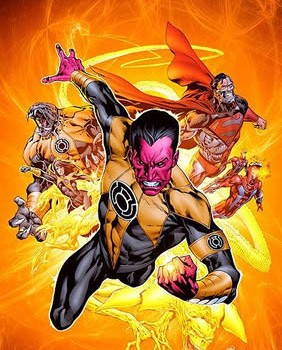 With The Sinestro Corps War Geoff Jones and company achieve the impossible, making 350 pages of large-scale, non-stop action consistently entertaining. The plot is incredibly simple – erstwhile nemesis Sinestro assembles an aggressive force of yellow-ringed Lanterns with which to take down Hal Jordan and co. – but told with such gusto and untiring inventiveness that it’s impossible not to get dragged into Johns’ epic space battle. True, this is unabashed sci-fi hokum, but it’s the colourful, traditional style of intergalactic superhero soap opera done well. There are so many memorable moments that still echo in my mind several weeks after reading this. The death of several popular Lanterns. Kyle Rayner’s transformation into Parallax. The punch-up between a galvanised Sodam Yat and Superboy Prime. The Sinestro Corps’ assault on Earth. The emergence of a further five lantern corps. The death and tragic reconstruction of Hank Henshaw. And so on.

This crossover was spread between two separate series (Green Lantern and Green Lantern Corps) and while the art is resultantly inconsistent it’s lent some level of stability by the clashing of colours green and yellow throughout. Scribes Jeff Jones, Dave Gibbons and Peter J. Tomasi all have a recognisably different style, but again this isn’t a huge problem, as the story tends to leap from between Hal Jordan, Guy Garner, John Stewart and the numerous extraterrestrial Lanterns depending on which title it was originally published in.

As kinetic and colourful as Sinestro Corps War is, the dual volumes probably aren’t an advisable read for anyone new to DC’s contemporary myths. Anyone who didn’t marinate their imagination in the pre-Final Night Lantern mythos is likely to be lost (though Green Lantern: Rebirth is a good place to start). But for those of us who can accept the core concept of colour-coded powers, and their strengths/weaknesses regarding over colours, this ranks amongst the Green Lantern Corps’ finest hours.