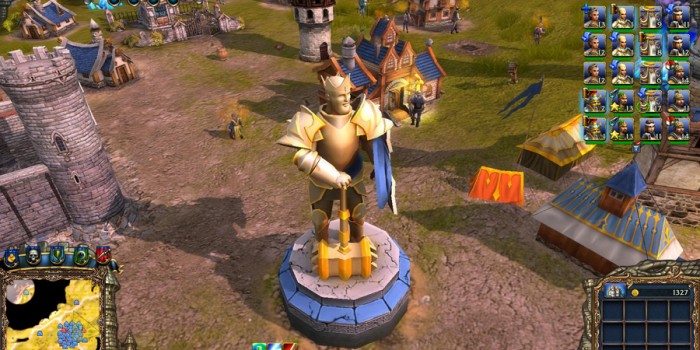 Strategy gaming often requires a most callous disposition. So, you’ve built an empire, formed an elite militia of the very finest and toppled rival nations one by one. Many infantrymen have died, patriotically heeded your orders as you marched them to your doom without hesitation, and not once did you ask them if they minded. Obviously, the little units in question are insentient pixellated beings running on a limited AI, and it would be a bit counter-productive to shed a tear every time one was sacrificed in the name of victory… But that’s exactly what 1C:Ino-Co and Paradox Interactive have attempted with Majesty 2, a “fantasy kingdom sim” where your only occasionally loyal and rarely humble servants aren’t so easily ordered around.

Fortunately, your subject’s compliance is quite easily bought. In fact, every action in Majesty 2 boils down to how much money you have at your disposal, and your hero units aren’t directly commanded but coerced through requests flags that you attach to certain locations, items and enemies. Want a fearsome beast hunted down? Throw a price on its head and someone’s bound to step up to the challenge. Need your taxes collected? Tight-fisted Rogues will be happy to help, provided they get a cut. Along with its indirect approach to leadership, Majesty 2’s brand of irreverence and silliness sets it apart from other real-time strategy games. With cutscene narration and in-game guidance from a hilarious Sean Connery sound-alike, the game’s medieval-influenced fantasy realm and its surly inhabitants would feel at home in Monty Python’s The Holy Grail. The humour doesn’t always hit the mark – often it’s just plain bizarre – but combined with the excellent graphics, overdramatic voiceovers and generally efficient AI, the frequent laughs helps make Majesty 2 a highly enjoyable romp that doesn’t try to outshine the competition so much as offer something refreshingly different.

Majesty 2 takes place 500 years after the original game, after which Ardania’s succession of rulers have eventually eradicated the world of evil. King Leonard, the first of his bloodline to be born into an unprecedented period of peace, is concerned that his reign will be so dull that future historians will have nothing to write of him. So Leonard does what any good ruler would do, summoning the world’s most powerful demon so that he may best it… only to be killed and lose his kingdom to the forces of chaos. Foolish, foolish man. Fortunately, you (yes you!), the illegitimate heir to the royal bloodline have been found, and are now expected to restore order to Ardania. Not that your subjects will appreciate it one bit, mind.

I should perhaps emphasise that I’ve never played the original Majesty. But I didn’t have to circuit the many forums on the web for long to get a general idea of how fervent a following the 2000 original had. Behind this delay is a cancelled sequel by Cyberlore Studios; Paradox then acquired the property in 2007, and since the game’s announcement several years ago forums have been alight with passionate criticism of every minor and major change to have been confirmed. I generally make an effort to play the predecessor of any game I review, but felt that it would be unfair to assess a nine year old game by today’s standards. Regardless, I think it’s safe to say that the majority of fans and newcomers will be pleased with this 3-D sequel. If there’s one area where Majesty 2 shines brightest, it’s with its heroes. These intrepid warriors are recruited by building guilds, where new skills can be bought in the customary fashion; armour and potions can also be developed then purchased from the blacksmith and market, respectively. Unlike many RTSs, where your units simply acquire new skills, your heroes will actually have to visits these buildings to spend money gained from killing monsters and fulfilling your objectives. Each guild has its own unique personality – rangers are more likely to roam new territories, warriors are protective of their kingdom, while the cutthroat rogues tend to flee at the sight of difficult beasts. Your heroes genuinely feel as though they have minds of their own, and learning how each one will react to certain monetary incentives is key to mastering Majesty 2 online.

Your heroes can also meet in taverns to assemble parties, which allow you to team up warriors as one might in an MMORPG – for example, using the warrior as a tank, the cleric as a healer and wizards and rangers for long range assault. Forming parries often requires a degree of forward planning, as certain units such as Elves and Dwarves don’t get along too well. This also applies to Temples; high cost buildings which permit your heroes to advance to several extremely powerful classes, including blademasters, paladins and beast tamers. These elite duellists aren’t always congenial towards each other either, and though you are limited to how many temples you can build on any one map (they require holy ground sites) it helps to have a flexible game plan in mind.

Where Majesty 2 also succeeds is in the deluge of obstacles it throws at your kingdom, often by way of choices Your Highness is forced you to make. While it is tempting to fill your kingdom with every amenity imaginable, a growing city requires a larger sewage system, and irremovable sewer pipes from which giant rats crawl will soon plague your townsfolk. Dead heroes can be problematic too, as the graveyard from which they are resurrected also harbours all manner of undead pests. There’s always of wealth of problems and a problem with wealth. Guilds also grant costly ‘Your Majesty’s Spells’, which allow you to do anything from instantly healing a wounded hero to having the Rogues Guild extort your peasants for taxes. The single player campaign consists of around a dozen fun, and funny, scenarios that force you to adapt your strategies accordingly. For instance, on one level you must build your kingdom from the ground up while suffering devastating attacks from a dragon, while in another your goal is to accumulate enough gold within a set time. The campaign does suffer from a steep learning curve, with players suddenly being thrown from the initially straightforward beginner levels to advanced stages without the preparatory “normal” difficulty. The quick single player missions are also comparatively complicated, with numerous dilemmas and minor objectives being thrown on you all at once. The interface is incredibly straightforward, however, and you’ll rarely be unsure as to what the game expects you to achieve.

Fun it may be, but the campaign is by no means a perfect game. The automated combat makes the game feel, well… too automated. The AI is generally very effective, with units refusing to stray far from their safety zone until they reach a higher level or are partied up, and while peasant lodgings and towers tend to suffer from enemy attacks it’s rare that you’ll lose a vital structure. The campaign also includes a malleable time scale, which is great in theory, but in practice tends to make the game a little too easy. The problem with this feature is that, in the campaign at least, it’s tempting to hit the 5x speed and watch your profits soar as your heroes earn money from defeating low-level invaders. With every mission you complete, one hero unit can be also raised to the rank of Lord, and hired again (up to a maximum of three) in subsequent battles. But the Lord system is a somewhat perplexing addition as Lords understandably cost far too much to be utilised in the earliest stages of your kingdom, and by the time you can afford them your other heroes have levelled-up anyway.

However, these issues aren’t present in Majesty 2’s multiplayer, which omits the campaigns’ malleable time scale and Lords for a slower but far deeper multiplayer experience where up to four kingdoms can duke it out at once. I had some difficulty getting onto a game, but when I did it played as well as anticipated.

Majesty 2’s medieval realm is a charmingly vibrant one, with comic touches such as the satellite dishes on a dark mage’s castle and the distinctive hero actions bestowing the game an endearing character. Real-time building damage and combat physics highlight the action superbly, with peasants struggling to repair vital structures as mutant rats demolish them from the opposite side. The single player campaign would have benefited from some visual diversity, though, as the majority of kingdom-building scenarios occur on indistinguishably generic woodland landscapes.

When I previewed the Majesty 2 Beta several months ago, I stressed concern over the game’s translation, which was so heavy-handed that it lost much of the game’s intended jocularity. Swedish producer Paradox and Russian developer                 1C:Ino-Co have chronically faltered in this respect, but Majesty 2 is perhaps their best translation so far. The aforementioned Sean Connery impersonator is ridiculously bad to the point of brilliant, and while some of the hero units speaks a little peculiarly (the Elves sound like pre-school children) the deliberately hammy delivery is generally enjoyable. The memorably ostentatious score also adds to the game’s droll theatrics.

Majesty 2 is indeed an RTS oddity, if not always in the way the developers may have intended. Its single player campaign is a complicated and addictive experience, but certain elements stop it from ever feeling as deep as it should. Conversely, the multiplayer has a greater deal of complexity but battles are often time-consuming.

But while Majesty 2 doesn’t quite rank among the real-time classics, it possesses a quirkiness that almost makes its minor failings forgivable. From the nonsensical mission briefs to a quest where you must safeguard a giant piece of cheese in order to capture the bothersome King Rat, Majesty 2 has a personality entirely its own. It’s the Spike Milligan of fantasy strategy games; always entertaining, sporadically funny, yet undeniably bonkers.