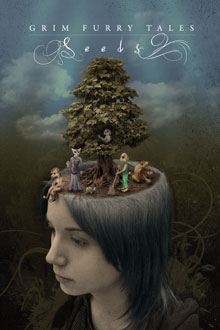 It’s surprising how strong an idea of a book’s content you can get from its title alone, and somewhat disturbing how difficult it is shake that initial preconception. Take Grim Furry Tales: Seeds, for instance. This collection of 17 short stories and accompanying journal entries, written by Martin Brandt II and illustrated by an assortment of artists, is not the children’s cartoon-styled escapade that its name might suggest but a sophisticated tale of growing up, and the wonders (and dangers) of imagination. Though Grim Furry Tales treads the same path as Bill Willingham’s Fables, initially depicting the war on myth, fairy tale and legend as a Lord of the Rings inspired battle between industry and tradition, these short stories are presented in the innovative metaficitonal context of a journal. Imaginative 11 year-old Laurel Matthews finds herself the protector of the Avatars of the Unwaking Lands, guardians of dream and whim sealed within the bodies of stuffed animals. Shifting effortlessly between illustrated prose, sequential art and diary extracts, Seeds is brimming with interesting notions and curious creatures; such as the mind-gobbers, imperceptible imps who feed on idle thoughts.

The illustrations for each short tale were donated by over a dozen artists, which has become a popular way of getting such ambitious comic projects off the ground. Each artist was given only minimal art direction, and their diverse approaches add to the book’s scrapbook narrative without feeling at all incohesive. Particularly impressive are Paul Petyo’s macabre diorama/photography work on ‘Bloody Bones,’ Kit White’s ‘Changeling’ and Chase Bowman’s illustrations in several of the prose sections.

Technically, Seeds is less of a graphic novel than an illustrated novel with sequential art sections. I’ve always had a problem with prose sections in comics, as they tend to stand against everything I consider the comic medium to offer – Alan Moore excluded, naturally – though it the context of this book they are completely justified. That said, I found Brandt’s narrative to be far more immersive better during the comic book chapters than the prose sections.

Martin Brandt’s is reportedly working on a follow up book, Grim Furry Tales: Inherited. He’s definitely set up quite the elaborate universe here, and describes Seeds as its primer. And that’s perhaps my one problem with the book; younger readers may find the tangled non-linear narrative a little confusing, yet the retellings of celebrated fairy tales don’t deviate enough from the originals to provide that additional layer of depth a mature audience demands.

But it’s this eclectic approach to storytelling that makes Seeds a treasure trove of childhood memories, written for that ever-decreasing population of children and adults who still yearn to be sucked, often literally, into a good book. Brandt’s writing has a playful nature about it, but he wisely refrains from the irony and cynicism that taints so many other postmodern fable revisions.

Grim Furry Tales: Seeds can be purchased at Coliseum of Comics in Lakeland, Florida and downloaded from Drivethrucomics. 115 pgs, $10.99