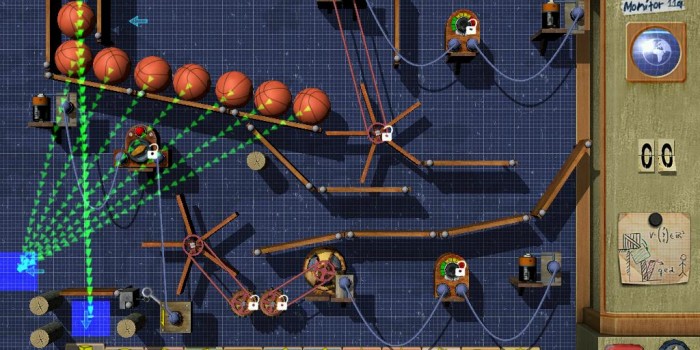 There are plenty of videogames that easily defy the “are our children learning something?” criticism the industry so often carries. It doesn’t take much effort to argue that Theme Park teaches business principals, while Tetris and its million imitators improve lateral thinking and hand to eye coordination. Even World of Warcraft educates littluns on the virtues of learning a craft and saving one’s pennies. Likewise, it’s difficult to imagine even the most sceptical engineering or physics teacher begrudging their pupils a few hours on Crazy Machines, a game that asks you to complete, and eventually build, “Rube Goldberg” machine; overly complicated contraptions for the most simple of tasks.

Anyone who recalls Doc Brown’s dog feeding device from the beginning of Back to the Future, erupted painfully at the episode of Family Guy where Peter Griffin builds one such elaborate contraption only for it to shoot him in the arm, or is old enough to remember The Incredible Machine or the board game Mouse Trap will have a clear enough idea of what a Rube Goldberg machine is. These elaborate set-ups follow a domino effect: ball hits switch, turns on torch, burns string, releases hammer, hits nail. Part of the fun in designing these contraptions – and there are enough on YouTube to suggest people do – is finding the most elaborate and indirect way of hammering that nail, cooking a sausage or powering a light bulb. If all this talk of pointless technical application is enough to whet your appetite, then Crazy Machine Complete may be the game for you. Essentially it’s a game that serves two purpose; primarily as a puzzle game, secondly as a surprisingly comprehensive virtual Rube Goldberg machine designer. While the Crazy Machines Complete package may contain both Crazy Machines and the 1.5 successor, each of the three games included are essentially the same, bar a different visual style and difficulty.

The brightly coloured ‘Inventor’s Training Camp’ offers a comparatively easy primer to the main Crazy Machines experience, with an emphasis on the “comparatively.” ‘Crazy Machine’ provides the intermediary experience, though that soon becomes so difficult that you’ll begin to feel that FAKT Software and Kalypso Media’s only reason for devising this game is to mock your puny chunk of grey matter. Lastly, there’s ‘New From the Lab,’ 101 levels so fiendish that I struggled at the second. It’s quite easy to imagine that Crazy Machines was built by some clandestine government agency to test on freaky-eyed bald kids in underground laboratories. The physics engine is pretty impressive too, with steam, air pressure and gravity all successfully imitating the intended effect. Rarely does a ball drop in a way that feels unnatural, or a balloon float off-course without a good reason.

This strict adherence to simulated physics both makes the puzzle element of Crazy Machines so appealing yet so indescribably frustrating. The placement of components is also ludicrously exact, and more often than not you’ll find that your solution is correct but mired by one element being several pixels to the left. On more than one occasion I found myself furiously scouring the internet for a solution to some of the earliest levels, only to find that my magnet or domino being an infinitesimal distance out. The puzzles are not always the most straightforward – as is the nature of Rube Goldberg machines, the solution is often so indirect that you’ll spend more time working out what to do than how to do it. It’s the ensuing frustration that may deter many casual gamers after they’ve torn several fistfuls of hair from their scalps.

But if you make it through the set puzzles with follicles intact, then the ‘My Lab’ virtual laboratory mode will likely offer you the most replay value, or at least it will for anyone with imagination, patience and a penchant for knee-length white coats. The range of elements is impressive, from simple shelves, spring, balloons and snooker balls to rudimentary mechanisms, electric switches, explosives and even a robot. Your imagination is your only limit, really, though it’s a shame that this iteration of Crazy Machines provides no easy way to share your creations online.

Graphics don’t make a game such as this, but Crazy Machine Complete’s visuals do their job, exhibiting some quality physics and shadow effects. Each of the modes has a distinctive style, with ‘Inventor’s Training Camp’ looking like it was constructed from Lego bricks while the harder levels have a more realistic, workshop aesthetic. The background music may evoke a New Age relaxation tape, but it’s pretty inoffensive, and mercifully, there is an option to turn off the irritating Professor commentary. Not only do his jokes soon begin to grate, but his withered mug tends to obscure the action whenever it pops up.

Quite oddly, this compilation has been released after the visually superior sequel. If you’re wondering which version to purchase, then I’d suggest that tech-picky desktop owners opt for Crazy Machines 2, while those wishing to play on a laptop or older PC can rest assured that this package has more than enough to justify a purchase.

It’s easy to admire Crazy Machines Complete. There are more than 350 puzzles in total, and the ability to create your own zany contraptions adds potentially infinite value to the package. This isn’t a game for everyone, and the steep difficulty curve and sterile presentation are likely to alienate those pulled in by similar games such as World of Goo. However, if you’re already dreaming up ideas to build with the virtual playset, it’s an easily recommendable purchase on Steam for the sum of £14.99. If you’ve an eccentric granddad that spends his afternoons tinkering away in a garden shed, you might want to enlist his ripened intellect; unlike yours, his brain won’t have become sluggish from years of friendly, accommodating puzzle games.