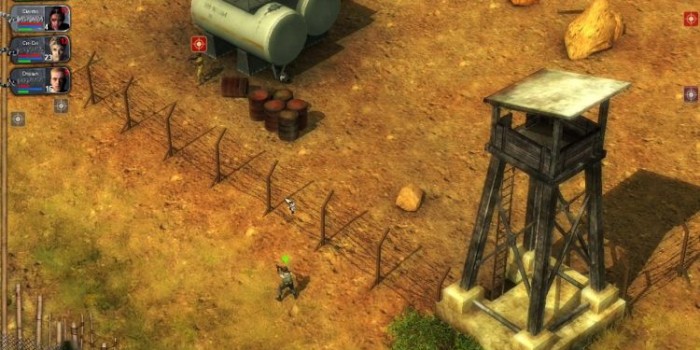 This spiritual sequel to the Jagged Alliance series does little to bring turn-based tactical gaming out of the nineties.

It’s becoming increasingly odd how people mourn the loss of point ‘n’ click adventure gaming when it’s still alive and kicking. With regular quality output from Telltale Games and other releases such as the Broken Sword Directors Cut and Still Life 2, there’s more than enough to keep fans of that particular genre pointing and clicking away blissfully. The turn-based tactical game, however, a deliberate approach to strategy found in titles such as X-COM, Silent Storm and Jagged Alliance is indeed as dead as the proverbial big bird. What’s more upsetting is that, bar a few nostalgic souls, nobody seems to care.

Thankfully, Russian-Ukrainian developer Game Factory Interactive still does care. Though GFI might have lost the intellectual rights to the series after its Jagged Alliance 3D and Jagged Alliance 3 projects collapsed, Hired Guns: The Jagged Edge is a sequel in all but name – though even the title is pretty similar. While this has obviously left the game open to keen-eyed scrutiny from the Jagged Alliance fanbase, there’s a fair bit to admire about this spiritual successor. But even though Hired Guns manages to nail the squad management, realistic combat and slow-paced strategy of Jagged Alliance there’s enough core gameplay faults that might make you wish that this style of game remained in the past. Hired Guns throws you into familiar territory, as you command a group of mercenaries through the African country to help a deposed Diamond Shore sovereign reclaim his authority from well-armed rebels. The plot is told via emails and conversations with locals; whether you feel required to read them is entirely up to you, but one nice touch is the way in which you can often spend your way out of trouble or circumvent confrontations altogether by being tactful with the locals. The mangled translation work, including such gems as “Interesting, how many bullets get into?” and “Is it hurt?” provides all sorts of hilarity… or may reduce you to tears, depending on how seriously you take your gaming.

The simulated laptop and map from which you’ll prepare between missions isn’t the most accommodating of interfaces, but once you get used to it there’s an awful lot to get your teeth into, from recruiting mercs and filling up a virtual shopping cart at Dickie Jay’s online gun store to reading email updates on the region’s restless political climate. Your mercenaries aren’t what you might call distinctive personalities, blessed with such fluffy, adorable names as Pitbull, Dagger and Ghost; several even have facial scars or glasses to really emphasise their burly individuality. Some will only work under certain conditions – for example, many will reject your offers when you are but a death-dealing novice, while others will refuse to work alongside those of a conflicting viewpoint.

Unfortunately, against this admirable level of detail is an antiquated, slothful combat engine. Gunfights often feel like paintball frolics, with bullets traded to little consequence. It’s incredible how often your attacks will fail for no particular reason; your average highly-skilled mercenary doesn’t exactly do much to justify the thousands of dollars you pay him when he’s unable to hit a guerrilla lying prone at his feet. A novel targeting system allows you to localise which parts of your enemy’s imminent cadaver you shoot, but it reduces the combat experience to something far more finicky than it should ever need to be. Each character’s stamina is gauged by a Breath indicator, which is consumed not only by running but by simply pulling the trigger on a firearm. During the protracted gunfights it’s not unusual for a mercenary to run out of stamina at the end of each turn. To complicate things further, your enemies don’t seem to have this problem, and are so overpowered that even the first level does nothing to ease you into Hired Guns’ stat-heavy gameplay. There’s no easy way to find your enemies, and in the dense jungle settings you may find yourself searching aimlessly for your next poorly marked objective. They also vastly outnumber your incompetent, asthmatic mercs, and you’ll frequently have to reload to an earlier save state because the game’s designers have seen fit to surround you with a dozen superior, grenade-hurling troops that you cannot hope to defeat.

To be fair, this problem is eased somewhat as you progress pass the first few levels. Each successful mission grants you income, as well as loot from the fallen. As you train and hire new mercenaries, your private militia becomes a far more efficient one. Ammo is pretty scarce, so many of the guns you’ll procure through combat are best sold for superior arms.

First impressions are always important, and Hired Guns blows its shins off before its even up and running, with some of the grainiest FMVs since Myst made its debut nearly two decades ago. Quite why the developers saw fit to even include these videos into the game is baffling, as the in-game visuals are actually pretty good. Provided your PC is powerful enough to showcase the dense vegetation, the game’s environments are wonderfully involved, with the detailed character models exhibiting just enough colour and personality to stand out from the greens and browns. The lack of weather effects is a lost opportunity, for both aesthetic and gameplay reasons, but the environments are generally well considered, with numerous noteworthy geographical features to distinguish each one. Naturally, the African jungle doesn’t lend itself to variety, but later missions involving a coastal city scenario, diamond mines and fortified buildings offer more than enough diversity. The music is generic but appropriate, and the voice acting is expectedly cheesy.

Despite the many problems that hinder Hired Guns, there’s actually a pretty decent game camouflaged in here somewhere. The level of detail and depth is impressive, from the various soldier stances and realistic gun effects to thorough weapon customisation. While the laptop interface is knotty and initially inhospitable it does lend the game a unique sense of immersion. Peter Games have thus far released eight patches for the game, and as a result it’s become a marginally more balanced experience, though the inconsistent weaponry and excruciating difficulty level still remain to some extent. These factors alone are likely to deter all but a loyal and curious Jagged Alliance following because, simply put, Hired Guns is no fun to play.

If Hired Guns had been released several years ago, it might have found, or indeed deserved, a more enthusiastic reception. Time has not been kind to the turn-based tactical genre that X-Com once made popular, but all it takes for this style of game to see a revival is for one brave developer to reinvent it. Hired Guns needed to be an evolution, but is instead an uninspired throwback that only acts as a reminder of how things have moved on. One for the hardest of hardcore fans, then.