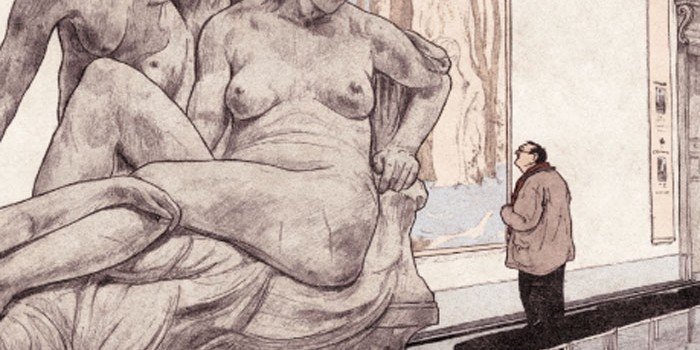 I’ve always felt that the finest filmmakers are the ones who can make the concept of “nothing happening” both interesting and engaging. Such a magnified and static approach to storytelling is something you rarely see in comics, but Ben Gijsemans’ debut is, much like the paintings the titular Hubert stares at for hours on end, fascinating in its languidness.

Hubert is a quiet, lonely man whose only release appears to be his regular visits to fine art museums, where he’ll gaze at paintings of beautiful women by the Old Masters until closing time. Sometimes he photographs the masterpieces and copies them at home.

The only two individuals of note within Hubert’s sphere are his equally lonely downstairs neighbour, whose advances he is either oblivious to or chooses to ignore, and a young woman living opposite, who Hubert spends his days staring at with unclear intentions. Gijsemans repeats snippets of close-up imagery again and again, often entire panels, at times suggesting only the slightest movement in order to capture Hubert’s placid, meticulous and private nature. He’s a character who I found endearing but could not tell you why.

Gijsemans is only in his mid-twenties, and Hubert was the thesis for his master’s degree. While his debut demonstrates a fine understanding of the form, what’s most remarkable is the level of restraint he exerts in rendering his introverted protagonist’s small but intricate world. It’s a beautiful book that evokes the equally intimate animation of Sylvain Chomet, and in the past few days I’ve found myself returning to it to immerse myself once again in Gijsemans’ depiction of the Brussels Royal Museums of Fine Art.

I’d struggle to write much more about Hubert, but not because I didn’t enjoy it – in fact I enjoyed it immensely. Its 80-or-so pages can be read in less than 20 minutes, but that’s not necessarily a criticism, more a consequence of Gijsemans’ light, largely wordless approach to storytelling. I came away from the book knowing only a little more about its central character than I did going in, but that makes this gentle portrait no less captivating.