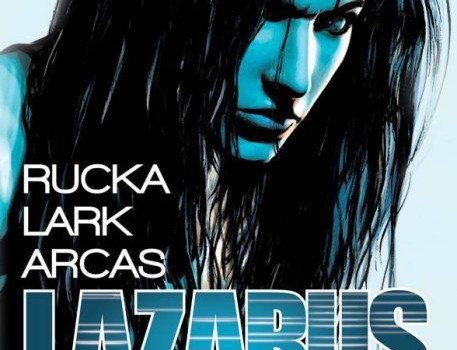 Greg Rucka’s latest effort Lazarus takes place in a world no longer governed by nations or conglomerates but the Families, a handful of wealthy bloodlines who own the lands through military power and conflict.

Those “lucky” enough to work within Family strongholds are known as Serfs, and are considered disposable by their superiors. But the Serfs are arguably more fortunate than the 99.9% of the human population which lives outside of a Family. These unfortunate souls are designated as Waste, and left to fend for themselves… unless, of course, their exploitation suits the Family. Lazarus is, then, a timely allegory of the ‘one percent’ wealth gap. But it’s also a comic book, and with the comic medium comes the need for something superhuman. Enter Foverer Carlyle, a ‘Lazurus’ to the Family Carlyle. A Lazarus is the member of the Family granted the very best training, tech and physical modification available, a sort of super-powered bodyguard, messenger and enforcer all rolled into one. Quite why any Family would put all their eggs in one basket is beyond me… but again, this is a comic book.

She may be stoic and ruthless, but Forever’s years of training and conditioning have not completely damaged her conscience. She’s also a far more sympathetic character than her repulsive, scheming siblings within the Family Carlyle. Rucka’s world is one in which life is cheap and those few in power are ever on the brink of blowing it.

Michael Lark’s rendering of that future isn’t far removed from the present-day Middle East; a world defined by ludicrous wealth, militarised zones and abject poverty. Only in Forever do we actually see anything resembling the glowing screens and biotechnology which usually define comic book science fiction.

I slapped down ‘Volume One’ of Lazarus with mixed feelings. Rucka’s setup is good, and the world-building is exceptional; those few glimpses of technology juxtaposed with a ruined, barren landscape really hit home the concept of a future exclusive to an elite few. But this first volume was light on plot and didn’t provide a substantial enough hook to make me want more. That said, there’s more than enough potential in Lazarus, and in the conflicted Forever Carlyle, to mark this series as “one to keep an eye on”.