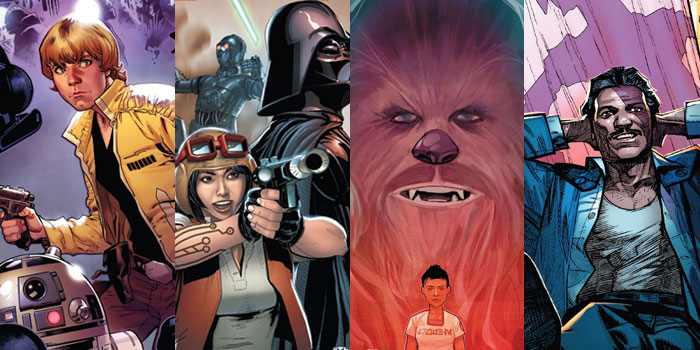 A few months back I looked at Marvel’s first five Star Wars trade paperbacks, which I found to be of mixed but overall decent quality. For now, there seems to be a drive from all involved to stoke the fires of nostalgia rather than forge something new or different, but at this point in the franchise’s lifespan that’s not necessarily a bad thing.

However, I’m interested in seeing where the superstar talents involved will take things once the ideas run dry – will characters and concepts from the Expanded Universe make their way back into canon, albeit in a new form? Only time will tell… When’s it set? Between Episode IV: A New Hope and Episode V: The Empire Strikes Back, running alongside the events of Darth Vader.

What’s it about? The second volume begins with a tale from Obi-wan’s exile on Tatooine, before following Luke to the nefarious “crime planet” Nar Shaddaa, where he runs afoul of a Hutt lord. We also find out what the hell the deal is with Han Solo’s self-proclaimed wife, Sana, and Vader’s hunt for Skywalker intensifies. Plus, bounty hunter Dengar makes an appearance, taking on Boba Fett’s adversary duties.

Worth buying? I stated in my review of the first volume that John Cassaday’s art made me feel like I was reading a blockbuster movie. Cassaday has been replaced with Stuart Immonen, and while his work is also brilliant it doesn’t quite embody Star Wars with the same level of dazzle.

Still, this is another crowd-pleasing volume, pushing all the right nostalgia buttons while bringing such characters as Dengar into the new canon. With a Hutt museum of Jedi artifacts and a battle against General Grevious’s battle droids, Jason Aaron continues to do a great job referencing the prequels while maintaining a safe distance from them.

However, it’s already clear that this series doesn’t have much of a direction. There’s only so far these books can take our beloved characters before they run into Empire Strikes Back. As was eventually an issue with the Expanded Universe, it will diminish the movie knowing that the two Skywalkers clashed a dozen times before their duel on Bespin.

Best bit: Dengar (have I mentioned him yet?) takes on Chewbacca, and though he puts up a good fight, goes out with a bang. But his appearance in Empire suggests that this isn’t the last we’ll see of him in comic form. When’s it set? Between Episode IV: A New Hope and Episode V: The Empire Strikes Back, running alongside the events of the Star Wars ongoing series.

What’s it about? ‘Shadows and Secrets’ sees the recently demoted Sith Lord now ranking second to Grand General Tagge, determined to prove his worth to Palatine under the watchful eye of Inspector Thanoth while he continues the search for Luke.

Worth buying? Certainly. Darth Vader is a far more self-contained series than Star Wars, but that’s kind of its strength. What’s perhaps most compelling about Kieron Gillen’s take on the Sith Lord is that it depicts the character at a low point; a doomed villain who sees his son as a chance to take down his master. Salvador Larroca has the toughest job in the galaxy trying to express that moral ambiguity through Vader’s emotionless mask, a job he handles with panache.

That said, much like the ongoing Star Wars series, one has to question how long this series can maintain its momentum. Doctor Aphra is fun but beginning to outstay her welcome, and while the series does indeed need a human element (delve too deep into Vader’s head and you lessen his impact) I can’t help but feel that she’s being pushed to the forefront too often as an intended fan favorite.

Best bit: To help pull off a heist on an Imperial ship, Aphra and her homicidal droids enlist the help of a motley crew that includes Bossk, IG-90 (er, IG-88’s red cousin?), the Wookie Black Krrsantan and the diminutive Beebox. I hope to see more of this lot. When’s it set? Shortly after Episode IV: A New Hope and the Battle of Yavin.

What’s it about? When Chewbacca’s ship crashes on an Imperial-occupied planet, he finds himself helping the feisty Zarro free her father from a local crime lord.

Worth buying? Chewbacca stands alongside Princess Leia as a miniseries that’s not bad, but doesn’t make much effort to either expand the new canon or develop its protagonist.

Still, it’s fun for what it is, and Phil Noto’s charming art is enough to make Chewbacca a recommendation for fans, even if his Chewie does occasionally look more like the happiest Muppet than the sort of Wookie who’ll pull your arms out of their sockets if you beat him at holochess. Also, we get to see Chewie’s family, neatly slotted back into canon.

Best bit: Chewbacca presents Zarro his medal of bravery. See, he did get one after all. But only once his human associates had been given theirs – the Rebellion believes in equality, see, but only to a point. When’s it set? Some time before Episode V: The Empire Strikes Back, and before Lando ran Cloudy City. I’m assuming that it’s set after Episode IV: A New Hope, though it’s disconnected from the events surrounding the Battle of Yavin.

What’s it about? A rollicking crime caper set within the Star Wars galaxy, Lando sees Calrissian and his loyal buddy Lobot forced to steal a spacecraft to pay off a debt. Typically, things don’t go down too well when that ship turns out to belong to none other than Emperor Palapatine. Worse still, it’s being used to transport a vault full of mystical Sith relics.

Worth buying? By far the best of the Star Wars miniseries so far, there’s good reason why fans were delighted when Charles Soule was announced for this.

Soule’s 5-issue script doesn’t stop for breath, and while Alex Maleev’s otherwise awesome art doesn’t quite represent the franchise as well as any of the other Marvel series so far, I eventually learned to appreciate it for that exact reason.

Lando takes a character I’ve never really cared for and throws him into a fun and ultimately tragic adventure that should appeal to not only fans of the franchise but readers of space opera comics in general. Soule also accomplishes what I’d have once considered the impossible: adding substance to Lobot and developing what was previously just another odd looking background character. I’ll never laugh at him in Empire again.

Best bit (spoiler): Lando reveals himself to be proficient with a blaster, then reveals this hidden talent to be part of an elaborate lifelong bluff that allows his opponents to believe they have the edge.