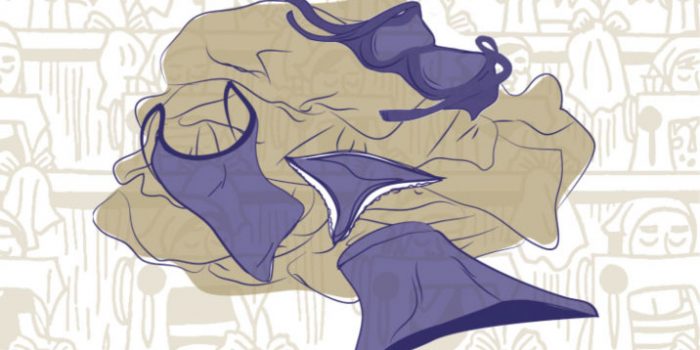 Appropriately enough, I actually read Threadbare, Anne Elizabeth Moore’s collection of comics on the garment industry, a few months after Andrew Morgan’s 2015 documentary The True Cost (at time of writing available on Netflix) made me change my shopping habits. Since my girlfriend and I watched that film, which exposed the garment industry as the second most devastating to the planet and showed the true victims of fast fashion, we both vowed to buy our clothes from charity shops (excluding underwear – I have my limits).

The staggering Threadbare: Clothes, Sex & Trafficking has only furthered my resolve. Illustrated by the Ladydrawers Comics Collective, a, um… collective of lady drawers, the book began life as a monthly series of journalistic comic strips on www.truth-out.org that hoped to shed light on the impact our shopping lifestyle has on women around the world.

In her introduction alone, Moore (a journalist, professor and expert on international labour issues) scatters some stunning facts. Approximately one in seven women is employed by the garments industry, making it, in Moore’s words “probably the single most responsible entity for the global gender wage gap.”

Threadbare is extensive and surpassingly even-handed in painting a global picture of the devastation caused by big business and western consumer practices, divided into four chapters that each focus on a different region of the world and the impact fast fashion has had on its people and economies. Many of the strips approach the grim subject matter with a wry sense of humour that would only work in the comic medium, reminding me once again just how powerful panels and speech bubbles can be in the right hands.

Chapter One shows the industry from a US perspective, and the implications of fast fashion on wages, retail workers and models working in the fashion industry. Chapter Two shows the impact on Austria’s spending habits and male consumers, and offers a fascinating look at how the closure of a nineteenth century flax mill in 1930 affected both workers and community. Chapter Three gets under the skin with a study of the industry in Cambodia, which is expectedly horrifying. People in the developing world are literally dying so that privileged westerners can buy disposable tat for pennies.

Perhaps most fascinating is the final chapter, which further explores the connections between garment production, sex workers and human trafficking. Much like everything else in Threadbare, nothing is ever as straightforward as it initially seems, and the garment industry is adept at turning our goodwill to its advantage.

Much of this I was already aware of, but even the most socially or environmentally conscious will find something that will jolt them, as Moore touches upon both the commonly known and the mindboggling. Melissa Mendes’ ‘Zoned’ exposes America’s denationalised zones, a concept that I’d find difficult to believe were it not so characteristically American.

As an egalitarian vegan (“your worst nightmare”), I’ve mixed feelings towards so-called fourth wave feminists and their oft-demonstrated inability to pick the right fights. In stark contrast, I found Moore and the Ladydrawers’ efforts focused and devastatingly effective, and would go as far as to call Threadbare essential reading for genuine feminists who truly want to understand and improve the lives of women around the world.

If there’s one everlasting message that Threadbare has left seared across my brain, then, it’s that true feminists don’t buy clothes from Primark, H&M, Forever 21, Gap… or any of the other morally bankrupt corporations that are destroying the lives of women around the world for the sake of a quick buck, no matter how great they may make them look. Or, as Moore states with admirable bluntness in the book’s conclusion: “if you want to support job opportunities for women in developing nations, don’t shop at the mall.”