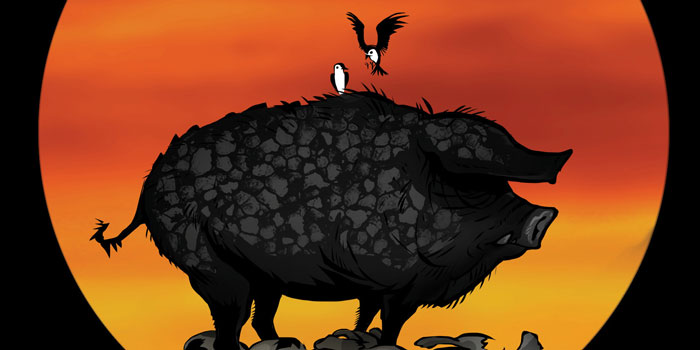 Kevin Miller and Kierston Vande Kraats bring us a porcine take on The Littlest Hobo, if the four-legged hobo had gained immortality after eating an apple from the Tree of Life. That’s right, when Adam, Eve and every other beast were exiled from the Garden of Eden, a leisurely pig decided to snack on the forbidden fruit before making his exit. Methuselah, Meth for short, is now cursed to walk the Earth forever, immortal and invincible and smarter than the average pork chop.

Aimlessly wandering the Asian continent while mankind destroys it, purpose finds Meth when he encounters Ali, an Iraqi orphan, and inept American archaeologist Mitch. The three of them embark on an indirect journey to find Ali refuge in America, but soon find themselves involved in an otherworldly conflict that… wont’ be further divulged until Meth’s much-anticipated second volume.

Kierston Vande Kraats’s greyscale art is inviting and engaging, with cartoonish characters placed atop more realistic backdrops. His art masks just how peculiar this book’s premise is; fantastical plot elements and offbeat humour are juxtaposed with real-world dilemmas and war-torn landscapes. Miller seems in on the ridiculousness of his premise: a character even points out that Meth’s breed of pig is only 10,000 years old, which Meth refutes by reminding him that he’s talking to a pig. Meth is distinguished from the average pig by his overhanging ears, which obscure his ominously empty eyes, a neat touch that allows Kraats to fit him into the plot’s more grounded elements without resorting to anthropomorphism.

Unpredictable and uncategorizable, Meth the Immortal is shaping up to be a really fun series. It’s tough to pinpoint the key demographic for a book such as this – it has the heart and aesthetics of an all-ages book but a level of graphic violence that may disturb younger readers. Younger teens and adults with a tolerance for quirkiness, however, will lap up the Meth’s unique premise, politically-charged first act and eventual descent into fantasy horror. I wholeheartedly admire the series’ refusal to be pigeonholed into any particular genre.

I’m a big fan of pigs (no, I don’t eat them), and found Meth to be a surprisingly fascinating protagonist. He’s a reluctant hero who’s generally self-serving, a sagacious guide who’s frequently terrifying. I hope this charming series and its titular boar continue to acquire new followers and make new friends.

For more on the series and Kevin Miller’s previous books, visit www.kevinmillerxi.com. Alternatively, you can purchase physical and digital editions from Amazon.