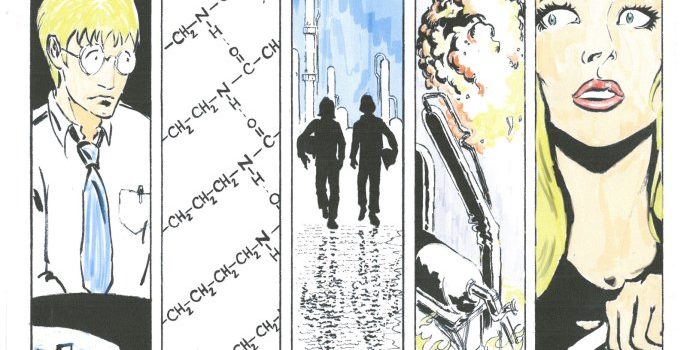 2016
Written and illustrated by Ramin Abhari

First and foremost, the thing I love about self-published comics is that they permit creators the freedom to not only write the material they’d want to read, but present that vision with an approach to storytelling that might not attract publishers or mainstream readership. Case in point: Ramin Abhari’s faithful account of the Flixborough disaster. The 1974 explosion at the Nypro chemical plant took the lives of 28 workers, injured dozens more, and caused damage to over 2,000 properties in and around the North Lincolnshire village. Nylon Years tackles a historical disaster that I doubt many comic book readers were clamouring to learn about, and does it all with as idiosyncratic an approach as possible. From the moment Nylon Years‘ fourth page opens up into a maze of chemical compound diagrams, it comes as no surprise that Ramin Abhari is himself a chemical engineer, and is just as concerned with the how as the why.

At times, the characters’ penchant for bursting into jargon-fuelled scientific and technical exposition reminded me of those 70s educational animations the Simpsons once had so much fun parodying. This is by no means a criticism, and if it sounds like I’m describing Nylon Years as an educational piece or a didactic affair, it’s certainly not. A cautionary tale, perhaps, but one that fuses hard science and historical events – the Arab-Israeli conflict’s 1973 oil embargo is but one of many factors that lead to the catastrophe – together via the lives of the workers involved.

Abhari’s art is heartfelt and his story is always engaging, the jargon-laden dialogue lifted by lively characters with whom you can empathise, even if you don’t know your polyamides from your cyclohexanone. The US-based creator never loses sight of the human element, grounding the accurate retelling with a fictionalized narrative depicting one of the real-life process operators, Allan Lambert, and partner Mary, whose personal lives we follow through the years leading up to the disaster and Lambert’s tragic death.  Naturally, the role of villain in this piece goes to the businessmen whose pursuit of a cheaper and more competitive nylon placed cost-cutting measures above expert counsel.

The Flixborough disaster hasn’t so much been forgotten as slipped from Britain’s collective memory. Nylon Years does a fine job of keeping Nypro’s tragedy alive for people who may not fully comprehend its technical implications but will definitely appreciate the historical context. Despite the book’s strong sense of period, it’s the book’s parallels with the present that leaves the deepest impression. You may wonder whether much has changed in the four decades that followed. Nylon Years is currently available on Amazon for less than a fiver. Ignore the UK store’s moronic one- star review, which appears to be reviewing the Flixborough disaster itself rather than the book. Sigh…