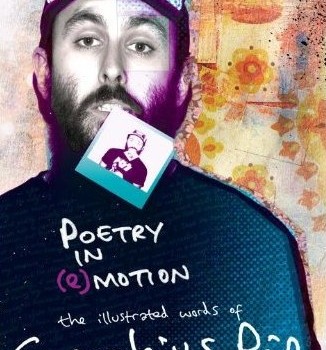 Named after the unclassifiable creature from Edward Lear’s classic poem, Scroobius Pip, aka David Meads, is a likewise curious beast. A spoken word hip hop artist whose music with cohort dan le sac is difficult to categorize and whose influences are too vast to pinpoint, Pip’s Essex accent has led to lazy comparisons with The Streets. But working man sensibilities aside, Pip’s lyrics are far more introspective and thought provoking than his egocentric contemporaries could possibly muster; candid and unpretentious, with a refreshing level of respect for the fairer sex.

Poetry in (e)Motion: The Illustrated Words of Scroobius Pip

Poetry in (e)Motion reprints ten of Pip’s songs, visualised by a selection of artistic talent from around the world. Some take the form of comic pages, others a far looser combination of words and images. Several are simply unique; such as ‘Shamed,’ in which Mister Paterson narrates Pip’s lyrics through the transforming tattoos on a pair of stationary forearms.

The book began life as a challenge from Pip to his Myspace followers, and the feedback included in this collection is as eclectic as the lyrics themselves, which range from reflections on the suicide of a loved one (beautifully rendered by Inna AizenSchtein) to the surreal ‘Waiting for the beat to kick in,’ in which Scroobius is visited by the central characters from Harvey, Say Anything and Buffalo ’66 as he wanders a mythical version of New York.

Meads launches each piece of illustrated poetry with an ego-free introduction, often focussing on the origins of both the song in question and his early career as Scroobius. His modesty here makes these pages in-between as interesting as the poems themselves, and potentially opens up Poetry in (e)Motion to an audience beyond fans of his music.

And this intimacy is what makes Poetry in (e)Motion: The Illustrated Words of Scroobius Pip so engaging. It’s a chance to see inside the head of an artist too unique to make it big and too smart not to appreciate life on the periphery. Regardless of whether or not Scroobius Pip’s hip hop stylings are to your tastes, it’s impossible not to get dragged in by his unquestionable talent and the spirit behind the indie contributors whom his words have inspired.