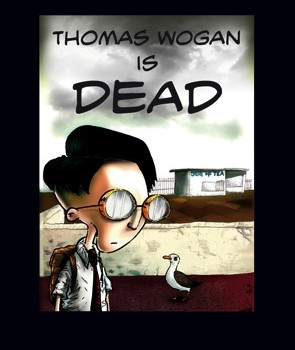 Thomas Wogan is Dead is a little gem. In fact, I think it’s safe to say that you won’t find another book like this out there. Whereas many indie comic writers strive to emulate the mainstream industry, David Hughes has created something that probably couldn’t have existed were it not initially self-published. The eponymous Thomas Wogan is an insipid, Delia Smith-obsessed office drone who mysteriously awakens naked in a featureless white waiting room alongside five anthropomorphic animals and an egg. As an ominous LCD screen counts towards their separate appointments, Wogan and the beasts (a frog, a bat, a fish, an anemone and a cuckoo) each recap the moments before their arrival in the white room. Yup, that title is in no way figurative; Thomas Wogan is quite dead.

As the book shifts between Thomas Wogan’s life and possible afterlife, we are taken through his bland existence, as Thomas drolly discusses his love for beans on toast and his love for “competent, methodical and safe cook” Delia Smith, which goes beyond disturbing (Thomas even owns a jar of Delia’s body hair), to the events that led to his presumed demise.

Hughes’ art is equally twisted, with some truly demented caricatures that fans of David Firth’s animations on www.fat-pie.com will absolutely love. Interestingly, Hughes adopts a more realistic visual style for the animals’ own finales, which range from comical to tragically pointless.

Thomas Wogan began life as a self-published title, and has justly made its way into a shiny, repackaged volume from Tabella Publishing. Thankfully, Tabella hasn’t gone to drastic efforts to cover the books handcrafted origins but for some snazzy new lettering, which may lack the original’s personality but should hopefully sell the book to a larger audience. Hughes definitely deserves the attention; his first graphic novel, The Immeasurable Adventures of Gorky Park, garnered only a humble audience.

At just £5.99, Thomas Woman is Dead isn’t going to take you more than half and hour to read, but it’s a book that will linger in your mind for much longer, and definitely merits a re-read. This witty take on Sartre’s No Exit has oodles of charm and a meek but sympathetic protagonist that readers might identity with more than they’d like to admit.

Thomas Wogan is Dead is available from www.tabella.co.uk for a mere £5.99. David Hughes’ blog is at www.stonechatproductions.blogspot.com.