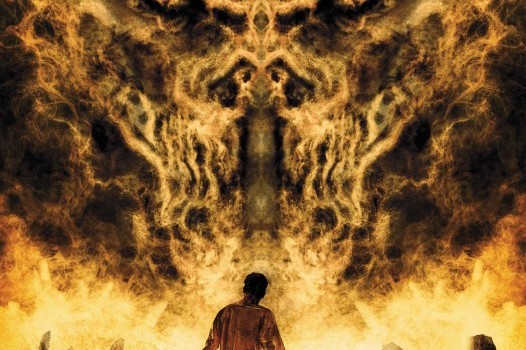 The sequential art edition of Stephen King’s N. has a somewhat convoluted production history. Originally part of King’s short story collection Just After Sunset, it was translated into a series of twenty-five ninety second-long video “mobisodes” by Spider-man and Flash writer Marc Guggenheim and Daredevil talent Alex Maleev, who have now converted their animated adaptation into comic form. The story itself is appropriately intricate. After a brief 1911 prologue in which a farmer massacres his family before blowing his brains out, we leap forward to 2008, where Sheila Bonsaint LeClaire writes a letter to an old flame concerning the death of her psychiatrist brother Johnny, who she believes committed suicide due to events concerning one of his patients, the eponymous N.

As LeClaire rifles through a box of Johnny’s notes labelled “burn this” we readers are transported to 2007, where Johnny studies the obsessive compulsive N., who has become increasingly infatuated with numbers since a visit to a stone circle at Ackerman’s field; the location of the opening murder.

Originally a time-hopping tale told through various documents and newspaper clippings, N. has made the transition to comic better than could possibly be expected. Guggenheim has kept the narrative framing devices intact, with numerous splash pages that swiftly build up the principal characters’ back-stories. And it’s a genuinely chilling story, of the kind that only King is capable of devising.

A premise as creepy as this needs a multitalented artist, and Daredevil talent Alex Maleev more than met the challenge when he illustrated the original motion version. Converted into the graphic novel format his art is simply stunning. Maleev’s lustrations are gritty, fantastical, brutal and ominous all at the same time, and make for some of his most interesting work yet.

N. is a pleasant surprise. Not in the sense that it’s inventively told or beautifully illustrated – those are to be expected from a premium Marvel miniseries – but that this iteration of King’s short story successfully conveys the sense of lingering dread that his writing is famous with a flair that King’s numerous movie adapters could only dream of.

Whether the rest of this series will meet the first issue’s promise or become increasingly silly as the fantasy elements begin to dominate, I can’t say, but I’m currently enjoying Stephen king’s N. more than I though possible.