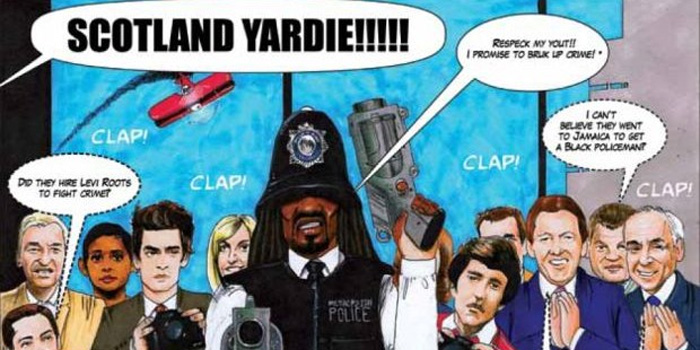 With Judge Dredd having diluted somewhat with age and pop culture recognition, it’s easy to forget just how sharp the satire in Wagner and Ezquerra’s creation was for those first few years. Dredd famously came about at the same time as Thatcher dug her claws into Britain, and with her demented clone Theresa May seeking to create an entirely new form of poverty, it’s time indeed for a new and more applicable comic book lawman.

Scotland Yardie manages to both be the antithesis of Dredd and share that comic’s early sense of wit and sheer anarchism. Creators Bobby Joseph (Skank Magazine, Black Eye) and Joseph Samuels take a swing every facet of modern life. Institutionalised racism, the state of the NHS, police brutality, consumerism and the gentrification of South London all get jabbed, as Joseph’s amoral, incomprehensible Rastafarian officer cleans the streets of Brixton with a shoot-first attitude. With his natural nose for crime and penchant for random violence, Yardie is the Tory government’s worst nightmare, a PR experiment gone horribly and hilariously wrong. Film critic Mark Kermode applies the ‘Six Laugh Test’ when reviewing comedies; any laughs fewer and that movie simply isn’t doing its job as a comedy. Reading Scotland Yardie made me realise just how seldom I laugh aloud at other so-called funny books. This comic had me in stitches, page after page. Most of those guffaws came at the expense of Yardie’s ineffectual partner Ackee-Saltfish, whose by-the-books attitude and self-righteousness make him the perfect foil for the irrepressible Yardie, who is less a character than a force of nature.

Joseph Samuels renders Yardie’s Brixton through a madman’s lens; his cast and locations have a warped sense of realism to them that often enters uncanny valley territory. Celebrities cameo in the background of every page, from Luthor and the cast of Breaking Bad to X-wings littering London’s skies… all for no other reason than the sheer joyous hell of it. At one point the action switches to the perspective of a mouthy chav pigeon, while the book’s villain, an unapologetic Walter White analogue, has a masterplan that involves plying London’s populace with his addictive “blue chicken”. It’s the sort of grade-A nonsense that we just don’t get enough of these days, hailing from a bygone age when comics were comics, not elaborate movie pitches.

This is the Brixton plod’s first full graphic novel, with the character having appeared in Bobby Joseph’s cult magazine Skank Magazine. Described by vice.com as the “black Viz”, Skank was a short-lived but influential satirical magazine that, unlike its contemporaries, I managed to completely overlook during its mid-nineties run. I’m sure that Yardie was just as bold and significant then as he is now, probably more so. The difference is that we now enjoy a comic book industry that celebrates its indie heroes (at least I like to tell myself so – it helps me sleep at night) and allows for greater access to creator-owned series.

So show Scotland Yardie your support. Britain may well be under Conservative control for the foreseeable future, but the one upside to our grave predicament is that we get to enjoy hilarious and spot-on satire such as this.