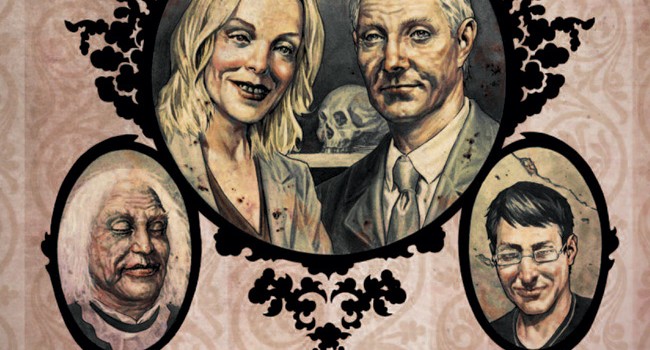 If countless books and movies are anything to go by, we do love to watch middle classed families fall apart. Denise Mina’s A Sickness in the Family, the latest in DC’s Vertigo Crime imprint, is a gruesome study of one such affluent and revolting clan. The Ushers are scum with table manners; Ted and his adulterous wife Biddy despise one another, while offspring William and Amy stick around solely for fear of losing their inheritance. Only adopted son Sam is in any way irredeemable, and the sole Usher to care for dear old Grandma Martha after she suffers a stroke.

Mina takes her time atrophying the Ushers, kicking their downfall into motion with the brutal murder of the downstairs neighbours. When Ted decides to expand their property into the now empty apartment below, the resulting echo their cavernous property now creates slowly drives the family towards madness. Furthermore, several horrific incidents soon convince the Ushers that a murderer lives amongst their brood.

A Sickness in the Family - Denise Mina

This leads us to the subplot of the witch that Sam is convinced still haunts their home. I was having so much fun seeing this dysfunctional household crumble, that the notion of a 16th Century witch unjustly murdered in the same spot as the Ushers’ abode felt clichéd, entirely unnecessary, and destined to drag the story into the depths of poorly conceived horror fiction. But Scottish crime writer Mina does something unexpected with this supernatural element, leading to a twist ending so expertly pulled off that you’ll feel the need to slap your forehead for not spotting the red herrings early on.

The monochrome art by Antonio Fuso (Fear Agent) is stylish, but always places focus on the story, which racks up the tension with level of menace and mystery rarely conveyed through comics. I wasn’t a particularly big fan of Mina’s Hellblazer arc (Empathy is the Enemy / The Red Right Hand), but with the digest Vertigo Crime format her noir sensibilities are given ample opportunity to electrify. And even if A Sickness in the Family’s ending is somewhat abrupt and callous, it’s executed with a sense of bleak humour that harks back to the EC era’s finest.

One thought on “A Sickness in the Family Graphic Novel Review”