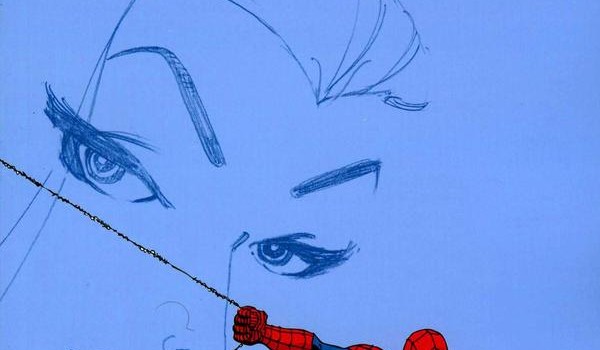 “Holy shit” I thought, after finishing Jeph Loeb’s Spidey Blue and wiping away the tears. Not often, but once in a while, you get a calibre of comic which comes out and transcends from pulpy, sci-fi nonsense into something that is intelligent and very human. You could give this story to any person, including people who couldn’t give a damn about Spider-man or comics, and they would enjoy and relate to a lot of it….although maybe not the bit about fighting a big dude in a rhino outfit.

Loeb has really good form in the field of re-imaging superhero origins, remaining really faithful and respectful of the source material but giving it more substance and meaning. Look at the list: Superman For All Seasons, The Long Halloween, the only man who made me give a shit about Daredevil in Daredevil: Yellow… because Matt Murdoch really loved his dead father. It took me a long time to get round to Spider-man: Blue because I was scared of it for two reasons. First, Daredevil: Yellow was so good I didn’t think it could be beaten. The second reason was that hard cover picture of Spider-man swinging in front of a blue background with Gwen Stacy’s face behind him. My thinking was, “the cover of this book is so sublime, what if the story sucks?” Thank God it didn’t. There have been times when I have bored people so silly talking about that picture once I’ve had a few, that they think I need help.

Right, regain composure… Spider-man: Blue is part of a set of books Jeph Loeb and Tim Sale wrote about Marvel’s heroes’ formative years. The other two are the previously mentioned Daredevil: Yellow and Hulk: Grey. This volume finds Peter Parker talking into a tape recorder, giving his account of how he met Gwen Stacy and Mary Jane Watson.

Parker’s dialogue is note perfect; Loeb balances the thoughtfulness of Peter, when he’s thinking about Gwen and Mary Jane, with the snappy psych-outs of Spider-man when he’s fighting his rogues gallery. Oh Boy does this book have a rogues gallery. Green Goblin, The Vulture, Rhino, Curt Connors, Kraven the Hunter… they’re all here and they compliment the Peter Parker love story really nicely by giving it a cool action set piece every few pages. The artwork very much emulates the early Spider-man look by John Romita Snr, with Harry Osborn not looking like James Franco and rocking his bow tie. I love how a lot of the main splash pages show the most mundane things, like Peter and Aunt May having breakfast or Flash chatting up Mary Jane in a diner. Again, this backs up the idea of the human, not superhero, side being more important.

Although not my favourite hero, I have always had a soft spot for Peter Parker because he never gets a break. Batman can always be like “boo-hoo, my parents are dead,” but Parker is more tragic because he’s like, “boo-hoo, my parents are also dead… and I’m fucking poor and everyone hates me at school!” There’s one scene in the Amazing Spider-man movie which epitomises this, and it was when Peter went out to get some eggs, got into a fight as Spider-man and came back without the eggs and got bollocked by Aunt May. He can never win and please everyone.

Spider-man: Blue treats really key moments in Spider-man history well, and there are loads of little treats, such as the recreation of the Amazing Fantasy #15 cover and the introduction of Mary Jane. Which brings me to the most important part: the last 3 pages. Perhaps the most heartfelt ending to almost anything I’ve read, and the dialogue in the final heartbreaking panel said by a character who annoyed me for most of the book. Loeb managed to make me feel sorry for Mary Jane Watson.

Seriously though, after all that snappy dialogue, colour and action, the death of Gwen affects both Peter and MJ so much that it has changed them and it ends on a really effective downer, one which instils the importance of the event and makes you sit up and take notice. It is just like getting punched in the face when you were enjoying the party, and this is what makes Blue great.

Because of my emotional attachment to this book, I wouldn’t really call this a review; it’s too personal. I would say that this is my love letter to Spider-man: Blue, as Jeph Loeb intended his work to be a love letter to Spider-man. Every time I pick it up the volume just to look at the gorgeous artwork, Mary Jane Watson’s words always come back to me: “face it Tiger, you just hit the jackpot”. Because, in having the chance to read something like this, you really do appreciate comics as an art form a whole lot more.