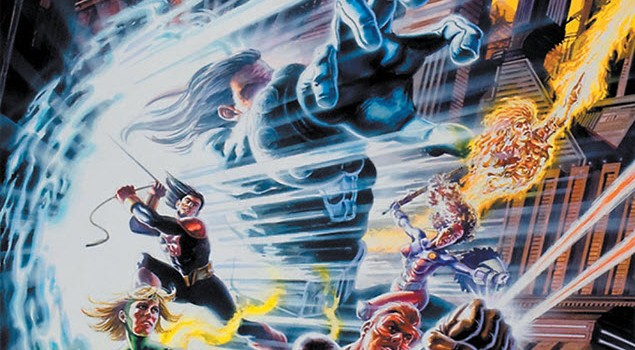 One of the most popular super-teams in comics returns in an all-new graphic novel over three decades after their 1981 debut! The Justice Machine fought to destroy tyranny on two worlds, but nearly twenty years ago they vanished–never to be seen again.

Until now! In The Justice Machine: Object of Power graphic novel, the team plunges into a nightmarish landscape of two realities warring for domination! The Machine faces off against the dark destiny that awaits all humanity if they lose the battle to stop their deadliest foes from regaining a foothold to the future!

The Justice Machine is fondly remembered as one of the most popular comic titles of the 1980s. The original Justice Machine debuted from Noble Comics in 1981 at the very dawn of the independent comics era, featuring an iconic cover by John Byrne.

The team holds a place of significance in comic’s history —they are the first super-hero group produced by an independent publisher.

The Justice Machine series told of the adventures and tragedies that befell the six super-powered members of a law enforcement agency from the planet Georwell, an alternate Earth. When they were branded as traitors, they fled to Earth through an interdimensional lock and found themselves cast in the roles of reluctant heroes.

The first series lasted only six issues, but such luminaries as John Byrne, Bill Willingham, Mike Grell, Joe Rubinstein, and even Jack Kirby made artistic contributions to it.

The Machine reappeared in The Justice Machine Source Book for the Heroes Unlimited role-playing game, making them the first comic book super-team to cross over into the growing game market. After that, The Justice Machine became one of Comico’s flagship titles, as well as one of the top-selling independently published comics. The Comico series lasted a respectable 30 issues.

When Comico suffered financial problems, Innovation picked up the Machine in 1989, reintroducing them as The New Justice Machine in a three-issue mini-series. The creative team of best-selling SF writer Mark (James Axler) Ellis and artist Darryl (Green Lantern) Banks set about streamlining the title and scaling away some of the barnacles that had accrued during its history.

After producing the mini-series and most of the issues of the regular series, the Ellis/Banks creative team moved to Millennium Publications and collaborated on such critically acclaimed series as The Wild, Wild West and the best-selling Doc Savage: The Man of Bronze.

Ellis purchased the Justice Machine property from Mike Gustovich in 1991 and again with Darryl Banks began work on a new series but only two issues were produced by Millennium before the comics market crashed in 1993.

Despite many inquiries and entreaties from publishers and fans alike, the Justice Machine has not been seen since late 1992, except for a well-received TPB compilation published in 2009.

But fans seemed to know that it was only a matter of time before Georwell’s refugee heroes would appear again.

In The Justice Machine: Object of Power graphic novel, the team returns in a very big way, courtesy of Bluewater Productions.

“I was a fan of this series as I started collecting comic books in the 1980’s and I could not be happier to have them and Mark as part of the Bluewater family.  Yes, we do fiction books…. from Logan’s Run, to the 10th Muse and William Shatner’s TekWar and Justice Machine is a perfect fit”, said Bluewater Productions publisher Darren G. Davis.

Ellis says, “The Justice Machine: Object of Power graphic novel offers readers the opportunity to get in on the ground floor of a cool and unique super-hero universe…one that has an established history but also one that they don’t have to memorize 60 years worth of revised past continuity to understand.

I’ve taken the attitude that the return of the Justice Machine is tantamount to a situation where the Fantastic Four had suddenly disappeared for years…not just in comic book years but in real-time years, as well.

The plot is definitely connected to the Machine’s origins, but it also provides a fresh start for the team. I can confidently say that The Justice Machine: Object of Power is tough, mature and action-packed.. The beautiful cover by brilliant Jeff Slemons perfectly captures the tone, as well as being something of a homage to the iconic John Byrne cover from the inaugural issue in 1981.”

Ellis promises that despite the temptation, the Justice Machine won’t be rebooted: “The classic origin and backstory of the characters and concepts is too unique to change, but we’ll provide enough history in the graphic novel so new readers won’t be lost and veteran fans will be satisfied.”

However, Ellis emphasizes there will be definitely be a new approach: “This version of the Justice Machine is unlike any past incarnation. The characters are the same, but the conflicts and even the costumes will be different. This is a retooled Machine.”

Ellis adds, “This is the perfect time for The Justice Machine to return, particularly with the interest Hollywood has in established comic book properties. There a color TPB compilation is currently in production and we also plan to collect the early Noble and Texas issues as TPBs digital downloads. We have also have a Café Press Justice Machine Shop where all sorts of cool merchandise can be acquired. So, even 30 years later, the gears of the Machine keep rolling.”

To see more about the new Justice Machine go to www.justicemachine.com or www.bluewaterprod.com.