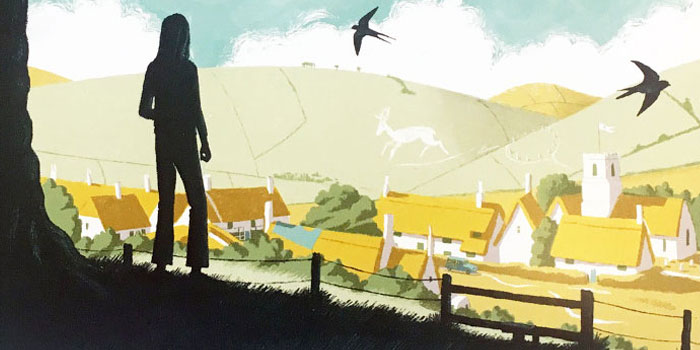 Whenever I look at my schedule and wonder if I should (or even can) continue sacrificing the time to blog, along comes another self-published gem that reignites my passion for comics and independent storytelling. Such is the case with Frances Castle’s Stagdale, a series that is, from its first instalment alone, seemingly equal parts coming-of-age-drama, Victorian ghost story, World War II mystery and multimedia project. It’s an indefinable work of the sort that you simply would not find outside of indie comics or small press.

Part 1 takes place in 1975, with twelve-year-old Kathy and her divorced mother moving into a dilapidated cottage on the outskirts of Stagdale, where they receive a far from warm reception. Kathy soon befriends village lad Joe, who tells her of the lost Stag Jewel, a golden jewelled Saxon amulet that, as part of local folklore, was said to bring the town good luck. The amulet was stolen during World War II, purportedly taken by a German boy who lived in the cottage Kathy now inhabits. But Kathy begins to suspect there’s much more to Joe’s story, Stagdale Manor and her cottage, when glimpses of a ghostly apparition lead her to a book hidden in the walls.

There’s an eerie, existential quality to Stagdale, though it’s subtle enough that I honestly have no idea where the series is headed. A mundane creepiness slumbers beneath Castle’s quaint countryside, with recurrent hints at a dark history evoking Twin Peaks, The Wicker Man, and all those wonderfully creepy British children’s miniseries from the 70s and 80s, such as Children of the Stones, that shaped a generation of creatives.

Castle’s clean artwork and busy panel compositions are descended from the same bloodline as the worlds of Posy Simmonds and Raymond Briggs. Some pages, such as Kathy’s visit to the Stagdale Museum, bustle with an overwhelming level of detail, information and inset panels. There’s an almost palpable sense of place to Stagdale, with its entangled history and reticent locals. It feels like an authentic location, and Castle’s establishing shots of the titular town often made me nostalgic for childhood holidays spent travelling alone the South West Coast of England.

The book includes a download code for an atmospheric Moog soundtrack by Castle’s project The Hardy Tree; a limited edition of the book with a flexi-disc was also available but is unfortunately now sold out. I’m glad I listened to the score after I’d read the book, as it instils a completely different atmosphere than I’d imagined myself. But isn’t that just the beauty of comics as opposed to other storytelling mediums? The artist provides visual prompts and dialogue for the readers to essentially then direct and score themselves. The soundtrack itself is excellent though, and I appreciated that it gave me a completely different idea as to where Stagdale’s talented creator plans to take her story next. It’s not too rare for an indie book to release with its own soundtrack, but Stagdale is possibly the first example where I felt the score genuinely added something unique to its source.

Stagdale’s first instalment is a tough book to fully review, as it ends just as it introduces its central conceit, with Kathy’s discovery of a diary promising to take us back to World War II in the follow-up. The press release teases a story about “two outsiders, from very different cultures and times whose lives become entwined by a dark mystery,” but even judged purely as an introduction to Stagdale’s locale, characters and (crucially) mood, it’s an astounding debut and a project that, in a few years’ time, you’ll be proud you supported.

You can buy the first part of Stagdale for £9.99, sample the aforementioned soundtrack and also check out Frances Castle’s sublime prints and limited edition vinyl at www.claypipemusic.co.uk.