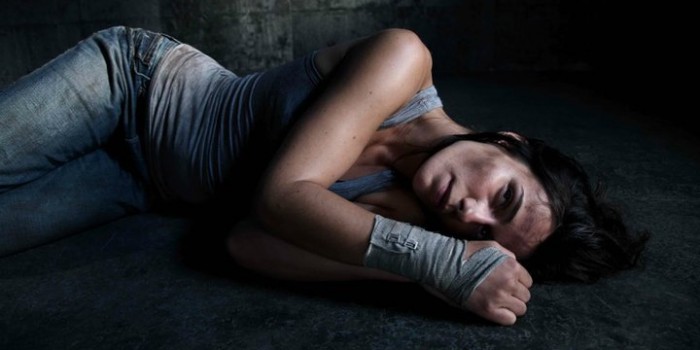 Organ trafficking gets the Texas Chainsaw treatment in this Gallic horror, which sees a group of humanitarians captured in Eastern Europe and kindly alleviated of their burdensome components.

While this premise may sound like the set up for another torture-porn endurance test, director Yann Gozlan keeps the majority of the film’s brutality off-screen behind closed doors. Caged’s press material compares it to the recent Martyrs, though the only things the two films have is in common is that they’re French and of the horror genre. Caged may lack the clout (and, arguably, depth) of Martyrs, but I didn’t feel like I needed counselling as the end credits rolls. Zoé Felix plays Carole, an aid worker perpetually haunted by a childhood experience in which her best friend was mauled to death by a dog. Conveniently, Carole’s abductors also use dogs to hunt escapees… yes, Caged is a film which marks out its plot in the first five minutes. Anyone who’s seen a dozen-or-so such movies will be able to predict the order in which are lead characters die with startling accuracy.

Not that predictability is really an issue; the cast are all convincing, and while the French horror scene may be running on automatic, directors such as Gozlan know how to sustain tension. Never does the plot extend beyond the chillingly plausible.

Caged is every film reviewer’s nightmare; a genre effort that does nothing to stand out from the (now virtual) rental store shelf, but isn’t bad enough to maliciously dismantle. Horror buffs wanting to add another tick to their ‘seen list’ can be assured that Caged is stylishly shot, compellingly acted, reasonably atmospheric and, despite its derivative nature, an enjoyable enough evening’s entertainment.

Caged will be released in the UK by Optimum Home Entertainment on April 18th 2011.