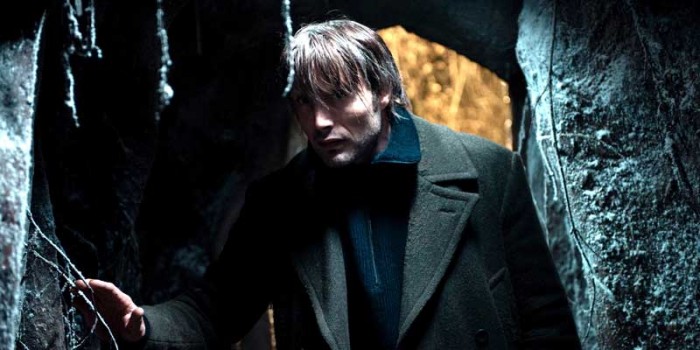 Following on from such curiosities as The Box and The Bothersome Man, German thriller The Door fits into a science fiction subgenre perhaps best described as “could have been a Twilight Zone episode.” It’s a dark and inventive “what if?” fantasy tale, based the novel Die Damalstuer, by German writer Akif Pirincci, whom I’m informed is considered the nation’s answer to Stephen King.

Crazy-eyed Mads Mikkelsen (Casino Royale, Valhalla Rising) plays David Andernach, an artist whose life is in ruins after his daughter drowned in the swimming pool while he was cheating with a neighbour. David is given a chance at redemption when he, quite literally, stumbles upon a magic portal which sends him back to that fateful day, allowing him to save his daughter. However, when an encounter with his past self leads to his death, future David is forced (albeit gladly) to relive the last five years of his life all over again. Mads Mikkelsen in The Door

Completely implausible, The Door is a movie about ideas, one in which it pays to consciously suspend one’s disbelief. Quite why David is a) able to afford the perfect suburban home from his average paintings alone and b) would cheat on his wife when she’s played by the stunning Jessica Schwarz are both factors beyond my comprehension. But, as this is a film in which the protagonist travels through time via a Narnia-esque tunnel conveniently located five minutes down the road from his house, I recommend taking The Door as a modern parable. Why let science get in the way of a good idea?

These high concept ideas generally falter at the thrid act, and The Door is no exception, upping the ante with a sudden plot development that doesn’t sit comfortably with the rest of the film. But director Anno Saul remedies this with a beautiful parting shot that defines the film’s central premise of killing one’s past self and starting anew with the advantage of hindsight, transforming what looked to be a generic horror into something unique and beautiful.

Original, thought-provoking, and sporting a compelling turn from the unusual Mikkelson, it’s baffling why this imaginative little movie has taken so long to get a UK release.

Extras: Interviews with the cast and crew, deleted/alternate scenes and a trailer.

The Door will be released in the UK by Optimum Home Entertainment on April 4th 2011.