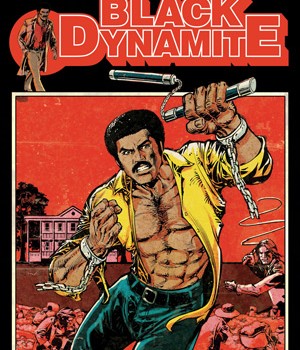 “Between the streets, Vietnam and the C.I.A., Black Dynamite thought he had seen it all. But nothing could have prepared him for his most dangerous mission yet! In BLACK DYNAMITE: SLAVE ISLAND, the world’s greatest Blaxploitation sensation uses his fists of fury to shut down a secret island where the Man still plays by 1850’s rules!” SLAVE ISLAND is based on a story by Michael Jai White, Byron Minns and Scott Sanders. Written by Brian Ash (The Boondocks),with inks by Jun Lofamia, one-shot is due in stores April 2011.

“We pick right up where the movie left off and continue with the same over the top action in the one-shot,” explained Brent E. Erwin, COO of Ape Entertainment. “When you are dealing with the quintessential badass, tough-as-nails hero, why would you change a thing?”

“SLAVE ISLAND is a blacktastic journey into a dynamite new world,” says the film’s director, Scott Sanders. “Ash and LoFamia created a spot-on recreation of the comics I loved as a kid, with an added Black Dynamite twist!”

Check out a preview of the book at http://www.ape-entertainment.com/marketing/BD_01_10PG_PREVIEW.pdf

Founded in 2003, Ape Entertainment is the brainchild of lifelong comic book devotees David Hedgecock, and Brent E Erwin. Home to such popular titles as GO-GO GORILLA AND THE JUNGLE CREW, SUPERHUMAN RESOURCES, BLACK COAT, ATHENA VOLTAIRE, and THE TROUBLE WITH KATIE ROGERS, it is also the North American publisher for DreamWorks Animation licensed properties SHREK and THE PENGUINS OF MADAGASCAR.