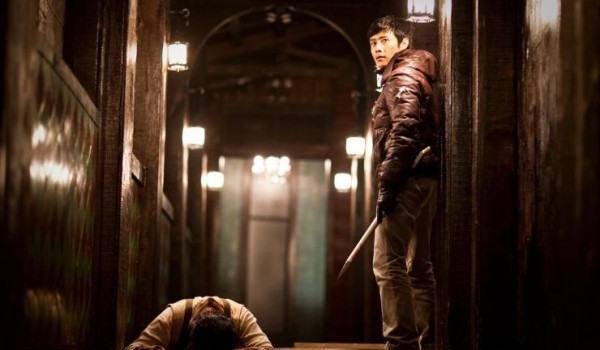 If revenge is a dish best served cold, Kim Ji-woon’s latest movie depicts a retribution so agonisingly prolonged that it’s covered in a veneer of mould by the time it’s doled out.

Upon hearing that his fiancé has become the latest victim of a serial killer, formidable secret agent Soo-hyun (A Bittersweet Life‘s Lee Byung-hun) soon tracks him down and takes his bloody vengeance. Rather than kill the vicious Kyung-chul (Old Boy‘s Choi Min-sik), however, Soo-hyun forces a tracking device down his throat and releases him. Lee Byung-hun in I Saw the Devil

Thus begins a bizarre game of cat and mouse, in which Soo-hyun episodically interrupts Kyung-chul mid-kill, and beats him to the brink of death before releasing him once more. But the aged Kyung-chul, a psychopath seemingly lacking a modus operandi, is not one to be backed into a corner, and inevitably begins to turn the tables on his pursuer.

This visceral Korean horror/thriller was recut for its native theatrical release, and it’s easy to see why. Kim Ji-woon showed a devotion to the crimson in A Tale of Two Sisters and an adept handling of graphic violence in A Bittersweet Life, but Devil is more visceral than any of his previous efforts. As Kyung-chul continues his intermittent killing spree Ji-woon leaves nothing to the imagination, meticulously chronicling the remorseless psychopath with a pornographer’s confidence. This intimacy works to almost beautiful effect in a slo-motion knife fight containing within a speeding car, but the movie stalls at several rape scenes that not only leave a bad taste in the mouth but detract from Soo-hyun’s indirect route of revenge. Choi Min-sik in I Saw the Devil

Yet despite my reservations concerning the level of on-screen violence, I Saw the Devil achieved something few recent genre movies have; it kept me second guessing. Even the film’s most repugnant torture scenes – several of which will have the Saw crowd wishing they’d stayed with the ironic, comic book gore of Western horror – do not fully diminish Park Hoon-jung’s emotionally-charged script and Ji-woon’s energetic direction. This hunter-prey revenge thriller is compulsive viewing throughout, if best avoided by the faint of heart.

Extras: Interviews with the director and cast, a Making Of doc and the obligatory TV spot and teaser trailer.

I Saw the Devil is available now in the UK, from Optimum Home Releasing.