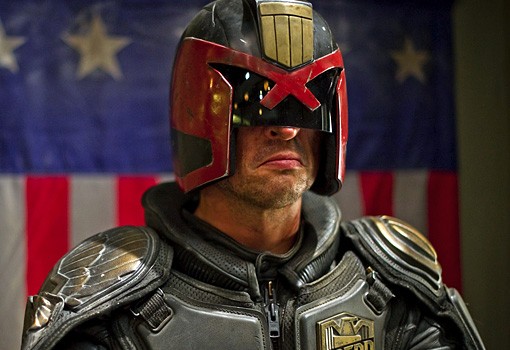 In a year when Dark Knight Rises provided a challenging, multifaceted deconstruction of a beloved icon and The Avengers brought Marvel’s finest to the screen with unparalleled authenticity, Pete Travis’s Dredd is a stripped-down, ultraviolent take on the 2000AD icon which owes as much to Die Hard and Assault on Precinct 13 as it does the irreverent source material.

This self-contained but polished take on Judge Dredd renders a Mega-City One more recognisable to our own cityscapes – and is perhaps the only aspect of Dredd’s mythos that this film loses out to Stallone’s 1995 debacle – in which much of a post-apocalyptic population lives in tower block slums. When three-skinned bodies go splat across the bottom of 200 storey-block “Peach Trees,” Dredd and his newly assigned rookie Anderson soon find themselves locked in and at the mercy of ruthless crime boss Ma-Ma and several hundred gun-wielding perps. Karl Urban’s role as Dredd is a thankless one, yet while he (to the approval of fans everywhere) refrains from removing the ridiculous domed helmet, this is a comparatively compassionate Dredd, more reminiscent of the 90s version than John Wagner and Carlos Ezquerra’s original vision of a fascistic Tory law enforcer who upheld the law rather than justice. Enter Olivia Thirlby’s Cassandra Anderson, the rookie with psychic powers and a conscience, who is dragged along for the ride. She also conveniently forgets her helmet from the get go, thus complimenting Urban’s impressive chin with some necessary human empathy.

Dredd and Anderson’s good cop/bad cop dynamic lends more personality to the film than the trailers might have purveyed, keeping the conflict engaging throughout the impressive if somewhat unimaginative set pieces. Headey is also chillingly effective as the hooker-turned-pusher Ma-Ma, though her husk of a villain provides more a threat than a sympathetic antagonist; there’s none of Cersei Lannister’s complexity here. If you’re hoping to see Dredd in the UK, then be willing to allow our nation’s finest cinema chains to rape your wallet. Good luck finding a 2D showing of the movie. Lionsgate and co have tried to disguise the films impressive $45 million budget (it rarely shows) with a veneer of superfluous 3D. One of the movie’s central gimmicks: Slo-Mo, a drug which causes its users to experience life at one tenth of its actual pace, is initially used to great effect, but soon loses its glamour with persistent overuse. Outside of the Slo-Mo moments, the 3D effect is rarely implemented; I had to remove the 3D specs on numerous occasions to enjoy the “talky” scenes the way they were meant to be seen, free of colour saturation and eyeball-ache.

I’ve attempted to sidestep the issue regarding certain similarities between Dredd and a certain Indonesian martial arts flick, but it does have to be said that both films are remarkably similar. Not only do they share the same premise but similar tone, pacing and thumping soundtracks… even certain scenes feel like a retread (of whichever movie you experience first). Yes, Dredd went into production before The Raid, but I can’t deny that I felt a lingering sense of déjà vu throughout. But neither the great 3D swindle nor unfortunate timing diminish what is a commendable take on a character I’d long considered impossible to adapt for the big screen with any success. Garland’s script could have done with a stronger sprinkling of Robocop’s satire. 2000AD’s dark humour is in there, but never as gleefully slapped on as it was in the original strip, but Dredd bears more than a hint of 2000AD’s anarchic attitude.

Travis and Garland have already discussed plans for several sequels (and yes, they’ve mentioned Judge Death), and while Dredd isn’t the biggest, best or deepest comic movie this year, it’s a solid introduction to Mega-City One’s unyielding guardian that left me desperately wanting a more expansive follow-up. Which is more than be said for The Dark Knight Rises.

One thought on “Dredd Movie Review”