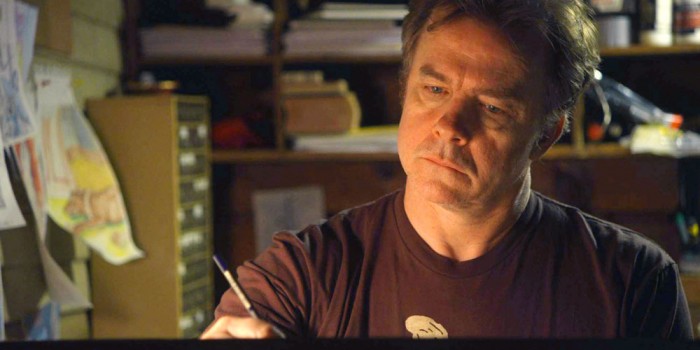 Why do so few movies deal with writers in their prime? Perhaps there’s just something far more relatable in the wretched writer whose creativity has been spent. In the case of Finding Neighbors protagonist Sam Tucker, he’s a once lauded graphic novel creator low on gas and contentedly resigned to writer’s block.

Sam’s agent persistently leaves messages on his answering machine, warning of an impending lawsuit from an unfulfilled publishing contract. Unperturbed, Sam continues to squander his afternoons spying on the young and promiscuous blonde next-door (Julie Mond), while his wife Mary (The Shield‘s Catherine Dent) enjoys her new position as their breadwinner. Finding Neighbors takes us through a few days in the curmudgeonly writer’s life, as he develops a close friendship with his gay Los Angeles neighbour (Lost‘s Blake Bashoff) and slowly confronts crises both existential and midlife.

Writer/director Ron Judkins is a Steven Spielberg collaborator and winner of two Academy Awards for Best Sound (Jurassic Park and Saving Private Ryan) but Finding Neighbours is the antithesis of such fare. It’s a gently funny film that never strives to be anything more than pleasant, and while at times it’s marred by some inconsistent acting and, somewhat ironically, an overbearing score that often dampens Sam’s emotional journey, Judkins tackles the subject matter with a tenderness that avoids the same tired clichés. O’Keefe, an actor who you’ll likely recognise but be unable to pin exactly where you saw him, is extremely likeable and relatable, and the film’s key strength is that it never pushes Sam’s middle-aged dilemma beyond plausibility. Occasionally the film breaks out into Una Lorenzen’s wonderful animated scenes, based on illustrations by Barry Bruner; these draw inevitable comparisons with the Harvey Pekar biopic American Splendor. While Finding Neighbors lacks the punch of that movie, I found the despondent Sam Parker an engaging study, and recommend Finding Neighbors to artists, writers and other maturing creatives who feel as though their craft has lost its lustre with age.

Finding Neighbors was originally released in 2013 but has now made its global streaming release on such platforms as iTunes. See www.findingneighborsmovie.com to find out more.